"The name says it all. You can weave in and out of traffic with ease in this little number. Get a blow up doll for the passenger seat and ride in the HOV lane. Apex Predators beware."
―Southernsanandreassuperautos.com description.

The Banshee is a recurring mid-sized sports car appearing in every GTA game since Grand Theft Auto III and shares its reputation with the Pegassi Infernus for being one of the two longest running sports cars in the GTA series. It is manufactured by Bravado in the HD Universe.

In Grand Theft Auto III, San Andreas and Liberty City Stories, the Banshee resembles a first generation Dodge Viper RT/10, with its dual exhaust and curvilinear design. It differs from its real life counterpart in its narrower width and headlight design. The Banshee also borrows minor elements from other 90s American coupes, such as the hood scoops from the 1993-1997 Pontiac Firebird and headlights resembling those of a 1994-1996 Dodge Stealth. The car's rear end is mostly based on the first generation Dodge Viper RT/10, but features wrap-around taillights, a distinct design element shared with the 1993-2002 Chevrolet Camaro. The Banshee also features very pronounced fender flares, something not found on any Viper and very uncommon on American cars of its era.

The GTA Advance rendition, which mimics the design of GTA III's Banshee, is also comparable to GTA 2's Rumbler, but is generally sleeker, sports the same single stripe as other Banshees, and comes with a vinyl top.

In Grand Theft Auto IV and Grand Theft Auto V, the Bravado Banshee resembles a second generation Dodge Viper SR, but has a side-pipe exhaust and a shorter roofline, resembling the third generation or fourth generation Dodge Viper ZB. The front fascia loosely resembles the Marcos Mantis, while the taillights resemble those of the Aston Martin DB9  and the front end resembles a Third Generation Mazda RX-7 . The interior of the car appears to be inspired by the MKIV Toyota Supra's, with the auxiliary dashboard controls facing the driver. Unlike the real-life Viper's V10 engine, the in-game Banshee has a 4.9L twin-turbocharged V8, according to the AutoEroticar website, and can be seen in-game if the player inflicts enough damage to cause the hood to open. Despite this, the engine sound in GTA V more resembles the typical sound of a turbocharged inline four engine.

Banshees in GTA IV and V are present as convertibles with roll bars, as well as hardtops. Similar to its real-life counterpart, the Banshee bears its own logo, resembling a screaming mouth with fangs on the side panels, steering wheel, and upholstery. The standard Bravado logo is used on the front and rear of the car. The Banshee comes in a standard monochromatic paint or with a racing stripe.

Banshees in GTA IV may also come with or without a vented hood.

In the enhanced version of GTA V, the Banshee is given a new interior model that greatly resembles that of the Dodge Viper's, right down to the vertically-aligned speedometers. 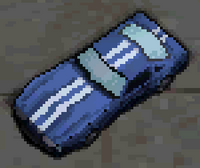 The Banshee 900R is a custom variant of the Banshee exclusive for Grand Theft Auto Online, which features highly-advanced modifications not present on the standard Banshee.

To obtain, the player simply needs to purchase a standard Banshee, take it to Benny's Original Motor Works and upgrade the vehicle to "Banshee 900R" for $536,750. Once the upgrade is purchased, many additional modifications will become available, such as interior modifications, vinyls, paint-jobs, and interior features.

Being a sports coupe laid out in an FR layout connected to a 5-speed transmission, the Banshee in the GTA III era is one of the fastest sports cars, but requires a tactile driving style to perform well. Fishtailing and spin outs are common if moderation is not used with the throttle. Examination of the game's engine reveals the vehicle's performance stats remain unchanged throughout, with a top speed of 124 mph (200 km/h), a weight of 2,240 lbs (1,400 kg),an acceleration of 10.7 ft/s² (3.3 m/s²), and all-wheel disc brakes. The Banshee's speed in GTA Advance is significantly high at 174 mph, nearly matching that of the Police Car, but has a marginally low crusher value of $ 448.

The Banshee in San Andreas features a different engine sound from the other games. Acceleration is one of the best in San Andreas. It reaches 0-60 MPH in roughly 4.3 seconds. Steering response is very sharp. Turning at high speeds may cause the car fishtail, so braking is appropriate considering the high power of the Banshee. Improper braking can also cause the car to slide, so you will need to brake smoothly. It appears to be powered by a carbureted V6.

The Banshee in GTA IV is very fast, thanks to its twin-turbocharged V8 mated to a 5-speed dual clutch with an FR configuration. The acceleration and top speed are similar to that of most exotic sports cars in the game, such as the Super GT, Turismo, and Comet. It is stated to have a top speed of 99 mph, however, with patience, the vehicle can slowly surpass that, reaching a peak of 108 mph.

The Banshee returns to GTA V, now sporting better acceleration, and a significantly higher top speed. Sharing the same braking distance in GTA IV, it is only slightly different performance-wise from GTA IV. The handling line has slightly improved, due to GTA V's new vehicle handling. Overall, the car is a good pick for an escape car, but not so good for off-roading, or for fast cornering, due to its back-heavy weight distribution, and its terrible grip.

Updated in GTA V, the Banshee now possesses a massive 8.4 liter carburetored V8 engine as reported on Legendarymotorsport.net (GTA Online). However, it is severely underpowered, even with twin turbochargers. What causes many players to turn away from the legendary sports car is the low top speed, only 140 mph, according to the website. This may actually be incorrect, as the Banshee is capable of catching up to supercars like the Infernus and even the Zentorno without any modification.

Retrieved from "https://gta.fandom.com/wiki/Banshee?oldid=866175"
Community content is available under CC-BY-SA unless otherwise noted.