Banging Trash Can Lids for an Hour! is an improvisational music show playing in Star Junction advertised in Grand Theft Auto IV. The show is a parody of Stomp. It cannot be viewed by the player.

Radio ads describe the show as a rhythmic music art performance extravaganza. The show has men and women fighting with brooms, tap-dancing with sanitation materials, and "a lot of heart". The performers make music using common household objects such as trash can lids, matchboxes, smashing open windows, etc., as well as sound effects from live people including burps from a hobo, flatulence, and the cries of women upset over their pregnancy test reading positive.

The show is received rather poorly in the GTA world with critics calling it "Astonishing... what people from out of town will pay to see!" A reviewer from Peepthatshit.com gave a rather pragmatic overview of the entire experience:

"The critics are baffled. It's not dance and it's not music. It's a group of failed ballet dancers jumping around the stage with a load of household junk and making shitty percussion that will give you a raging migraine. Pay $150 to watch people hammering a bucket with a spatula or smacking a frying pan with a broomstick for an hour."
―Peepthatshit.com

The Official Home Pregnancy Test
Add a photo to this gallery

The show at the Liberteen. 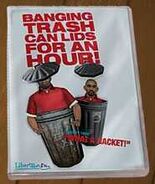 The show's program, as seen on the Rockstar Games Social Club website.
Add a photo to this gallery
Retrieved from "https://gta.fandom.com/wiki/Banging_Trash_Can_Lids_for_an_Hour?oldid=1137270"
Community content is available under CC-BY-SA unless otherwise noted.