No
“We all have days when we're feeling fragile and in need of some support. Well now, no matter where you are, and no matter how bad your situation, you can pay Pegasus to deliver this head-to-toe, military-grade body armor with accompanying minigun, and we guarantee your problems are about to get a lot smaller, and a lot more open to negotiation.”
— Warstock Cache & Carry description.
“Ive got a minigun you humorless prick!”
— Trevor Phillips

Ballistic Equipment is gear appearing in Grand Theft Auto V and Grand Theft Auto Online. The gear was added to GTA Online as part of the Import/Export update, exclusive to Adversary Modes. As of the Gunrunning update, it becomes a purchasable and usable gear in Freemode.

The Ballistic Equipment appeared as Military-issued heavy ballistic armor, akin to a bomb suit, complete with a protective helmet and glass shield to protect the wearer's face. It includes protective layers for the upper and lower side of the body, as well as for the limbs (except the right upper arm, where it lacks a protective layer).

As of the continuation of the Import/Export update, players are able to play in the Juggernaut adversary mode as the "Juggernaut" of the team, a heavily-armored unit. This one looks very similar to the first one, except that the helmet is replaced with a diamond-shaped steel mask. The clothing under the layers of armor are colored according to the team's color. This one produces a unique robotic-like sound and every time the Juggernaut kills a player, flames comes from the mask.

As of the Gunrunning update, players can purchase Ballistic Equipment, which is still based on the first version of the suit, but rather than the glass shield, the wearer employs a ski mask with a skull on it, in tandem with a bulletproof helmet.

Despite the suit appearing to provide additional protection to the wearer, it does not affect your armor value. Instead, upon equipping the suit, the player will experience a tremendous health boost that will make them extremely durable against all forms of damage. To marginally increase durability, players can opt to wear body armor beforehand and it will carry over, even with the suit on. Wearers of the suit will have the standard health regeneration, although it will be extremely slow proportionate to increased health value.

However, they suffer a reduction in their walking speed (slightly faster than when walking on muddy surfaces), they cannot enter vehicles, interiors and cannot perform an evasive roll, although they can roll after jumping. Similarly, they can survive up to two rocket hits, at the cost of having an extremely low health.

The suit will also grant access to a minigun with infinite ammunition but will be unable to use any other weapons. As a result, the player is also incapable of taking cover while in the suit.

The wearer will not be able to access their inventory to use snacks and body armor, although they can still pick up and eat snacks dropped by enemies. Players can also still pick up items such as Bullshark Testosterone.

Additionally, the wearer can not swim in waters, lakes, rivers, or oceans. Should the player reach the waters will result as an instant death, thus destroying the equipment.

VIP work, MC contracts and freeroam challenges cannot be activated with the suit on, and if the player manages to start one of said activities with the equipment applied, then the equipment will be automatically removed.

As of the Gunrunning update, players requires research in their bunker to randomly unlock this item at Warstock Cache & Carry, for $500,000.

Research Complete:
Ballistic Equipment unlocked.
“You might want to consider a bonus for your research team, they've struck gold... or para-aramid fiber and ballistic armor plating... to be more precise.
It's not the sort of thing you can manufacture yourself, so the designs went through Warstock and they'll sell it back at cost. Check it out.”
— Agent 14's call

After purchasing it, the player can request the gear via the interaction menu and selecting the corresponding item, for $5,000. A message will indicate that a crate drop will be deployed near the player's location. If the player dies or discards it, they will have a cool down of 15 minutes until they can request another crate.

The Ballistic Equipment, as seen in the Grand Theft Auto V mission The Paleto Score. 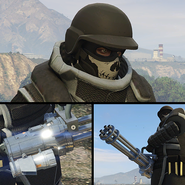 Unlock criteria for the Ballistic Equipment. 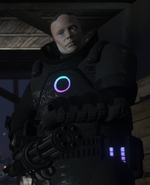 A Cliffford Mercenary juggernaut without a mask, revealing the machinery behind it.

Leader of The Professionals variation of the Ballistic Equipment.