Standard White - 100%
“Culture and Sandy Shores. Oral hygiene and CoK. Hardcore and SUV. Some words just don't go together. But now the badass Baller ST is here to smash those linguistic socio-linguistic glass ceilings along with the rear windshield of the car in front.”
— Legendary Motorsport description

The Gallivanter Baller ST is a luxury four-door SUV featured in Grand Theft Auto Online as part of The Contract update.

The vehicle is essentially a sportier variation of the Baller LE LWB, which at the same time, is a derivative of the Baller LE and the second generation Baller. The vehicle shares the initial body design of the LE LWB, but features an updated frontal design that bears a resemblance to the 2018-present Range Rover Sport SVR (L494). It also has a newer rear fascia, as well as several cosmetic details.

In the frontal area, the car retains the carbon-fibre underline, carbon-fibre main grille and headlamps with carbon-fibre surroundings. However, the bumper has been slightly enlarged to match the height of the wheelbase, while the underside grille has been made a bit shorter in height and only has a single wide dividing sheet finished in black. The bumper grilles have been changed as well, being slightly taller than the underside grille and with a carbon-fibre surrounding, no longer housing dividing sheets or daytime running lights. The bonnet remains identical in shape to the aforementioned vehicles, but has dual intakes with impressed areas.

The side profiling and glasshouse area are largely identical to the LE LWB variant, retaining the carbon-fibre piece that runs from the doors and towards the rear end, as well as the carbon-fibre trim around the windows. However, the skirting area has a concave ridge just below the doors, while the mirror wings are finished in black.

The rear of the car retains most of the features from the regular Baller and its variants, being the modern tail lamps and the carbon-fibre details. However, the bumper has been also slightly enlarged to match the height of the wheelbase, along with a concave formation that spans most of the car's width and lead to a set of small exit vents. The carbon-fibre section bears five diffuser blades, while the twin exit, twin quad-valve exhausts no longer feature cross-bar separations at the exit of each of the four tips.

Colour distribution is largely similar to the Baller LE and the LWB variant, where the primary colour is applied on the bodywork and the engine cam covers, while the secondary colour is applied on the overstitches of the interior. A trim colour is also available for the interior, similar to the LE and the LE LWB variants. It shares the same rim design as the Rebla GTS and the Landstalker XL, but the single spokes are finished in silver/chrome rather than black.

The vehicle is powered by a single-cam V8 engine that is fitted with a supercharger, coupled to a 7-speed gearbox in a front engine, all wheel drive layout (60%-40%, front to rear torque distribution). Its engine sound appears to be similar to the one found on the Novak, itself being a variation of the engine sound found on cars such as the Schafter V12 and the Nightshark. However, it has a much higher pitch.

Advertisement during the Festive Surprise 2021 event. 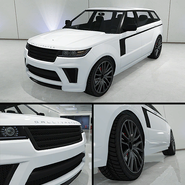 The Baller ST on Legendary Motorsport.

The Baller ST in the cinematic preview on Rockstar Games Social Club.