No
“An armored executive SUV, ideal for any CEO who wants to give off that hostile takeover vibe as they park on top of their PA’s hatchback.”
— Career Builder description.
“Redefine off-roading with Gallivanter's new and improved Baller: sure, it'll fall to pieces at the slight of rugged terrain, but it'll plough through cycle lanes more smoothly than anything else on the market. This model has an extended wheelbase. Armored edition available.”
— Legendary Motorsport description.

The Gallivanter Baller LE LWB (Armored) is an armored four-door SUV featured in Grand Theft Auto Online as part of the Executives and Other Criminals update.

The vehicle is essentially the armored variant of the Baller LE LWB, which features armor padding on the sides and window armoring on the pillars.

Colour distribution is the same as the regular Baller LE and the Baller, where the primary colour is applied to the body and the interior stitching. A trim colour is also available for the interior, being applied to the dashboard, seats and door panels. Its wheels share the same rim design as the "Nevis" off-road rims available in Los Santos Customs, wrapped in high-profile tyres.

The armored variant of the Baller LE LWB has the lowest acceleration rate of all the Ballers, and due to the further weight increase, has worse handling than even the armored Baller LE, as it suffers from oversteer if cornering at high speeds. Its traction remains mostly identical, featuring active terrain response and gentle suspension, meaning the ride is comfortable, yet deadly to other road users when used as a ramming vehicle. Despite the ingame website's remark, it actually boasts impressive torque and offroading capabilities, competitive to the likes of the two Sandkings and other similarly-priced renown offroaders in manner of raw engine power and traction, although it suffers from mediocre ground clearance compared to others.

Though the engine model does not feature any manifolds, the engine cover displays what appears to be a single-overhead camshaft V8, fitted in a front engine, all-wheel-drive layout, longitudinally. According to the website, the vehicle is powered by a 530 bhp 5000cc V8 engine, accelerating it from 0 to 60 mph in just 9 seconds, which, considering its further increasing in weight, is still impressive. Its top speed is stated to be 120 mph, 40 mph slower than the Baller LE. Its engine sound is similar to the one on the Tornado and the Bullet, being slightly higher pitched, smoother, and of higher performance.

The Baller LE LWB (Armored) can take the following: 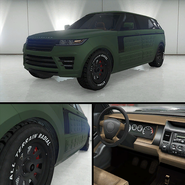