No
“Redefine off-roading with Gallivanter's new and improved Baller: sure, it'll fall to pieces at the slight of rugged terrain, but it'll plough through cycle lanes more smoothly than anything else on the market. This model has an extended wheelbase. Armored edition available.”

The Gallivanter Baller LE LWB is a luxury four-door SUV featured in Grand Theft Auto Online as part of the Executives and Other Criminals update.

The Baller LE LWB is the Long Wheel Base variant of the Baller LE, which in turn is a derivative of the second generation Baller, based on the 2015-2017 Range Rover Sport SVR (L494). Its extended wheelbase may be inspired by the larger L405 Range Rover LWB.

The vehicle is largely identical to the Baller LE in terms of design and features. However, it features an extended wheelbase and slightly larger rear doors. The rear seats were also placed further back, giving extra space inside.

Colour distribution is the same as the regular Baller LE and the Baller, where the primary colour is applied to the body and the interior stitching. A trim colour is also available for the interior, being applied to the dashboard, seats and door panels. It shares the same wheel design as the Baller LE, being a unique set of 10-spoke rims, which are split into 2-blade forks, totaling in 20 separated spokes. The wheels are finished with a fine line around the edge, and five bolts are fitted in the centre and wrapped in low-profile tyres. Red-brake ceramic disks are found replacing the original, smaller gray iron disks. The rims themselves can be repainted through Content Creator, although the permanent black finish gives it a darker tint/shade.

The Baller LE LWB is on par with the Baller LE, if not lower in performance terms. The acceleration rate is slightly lowered due to the excess weight added with the lengthened chassis, and the longer wheel base means the handling and cornering can be very slack, and oversteer is very notable. Braking is similar to the LE Armored. Traction becomes much worse due to the weight, and the AWD is the only thing helping the vehicle set off on road properly.

Though the engine model does not feature any manifolds, the engine cover displays what appears to be a single-overhead camshaft V8, fitted in a front engine, all-wheel-drive layout, longitudinally. According to the website, the vehicle is powered by a 530 bhp 5000cc V8 engine, accelerating it from 0 to 60 mph in just 7 seconds, a rather impressive speed for an SUV of this size. Its top speed is stated to be 160 mph, which is impressive for a vehicle with an enlarged wheelbase, but is still an issue, considering a more powerful engine would be required to pull a larger vehicle. Its engine sound is similar to the one on the Tornado and the Bullet, being slightly higher pitched, smoother, and of higher performance. 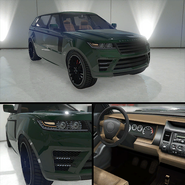 The Baller LE LWB in the cinematic preview on Rockstar Games Social Club.