No
“Redefine off-roading with Gallivanter's new and improved Baller: sure, it'll fall to pieces at the slight of rugged terrain, but it'll plough through cycle lanes more smoothly than anything else on the market. Armored edition available.”
— Legendary Motorsport description.

The Gallivanter Baller LE is a luxury four-door SUV featured in Grand Theft Auto Online as part of the Executives and Other Criminals update.

The Baller LE is a Limited Edition version of the second generation Baller, based on the 2015-2017 Range Rover Sport SVR (L494).

The vehicle shares the initial body design from the regular Baller, but features an updated frontal and rear fascia, as well as newer cosmetic details. In the frontal area, the polymer portion of the regular Baller is replaced by body-coloured quarters with a carbon-fibre underline, while the spacing between the underside grille area is filled in with the continuation of the bumper replacement. The central vented area from the regular Baller is replaced by a bigger underside grille, featuring carbon-fibre sheets dividing the main area into three elements. The bumper grilles on the sides are quadrilateral shaped - almost like an arrow, rather than the original pentagonal shaped grilles. Two sets of daytime running lights are found in each side grille instead of one, and the polymer separations are absent. The main grille, on the other part, has been made shorter in height, with the chrome details being replaced by carbon-fibre ones, as well as rearranged sheets dividing it into four elements. The thickness of the bar dividing the main grille and the underside grille is smaller. Next to the main grille there is the same headlamp sets from the regular Baller, but the polymer surrounding is replaced by carbon-fibre ones.

In the side profiling, the original chrome-finished body-line piece that begins with a rectangular shape behind the front fender is carbon-fibre, bearing the black stripe pattern. However, the three drawing lines found on the chrome rectangular shape still remain on the carbon fibre replacement. The skirting area features a unique curved detail that slightly protrudes from the rest of the car, which is not seen on the regular model. The window pillars are also finished in carbon fibre, replacing the polymer-finished pillars from the regular model.

In the rear, several differences are found, which can be hard to notice at first glance; just like the front bumper, the black polymer trim is replaced by coloured quarters as a continuation with the rest of the trim. The unused red-foglights are removed and make way for a larger rear area with a newer set of twin exit, twin quad-valve exhausts, which are black-tipped and feature a unique cross-bar separation at the exit of each of the four tips. Again, the car retains the same tail lamp sets, although the surroundings and the strip that connects both light sets are also finished in carbon-fibre.

Colour distribution is the same as the regular Baller, where the primary colour is applied to the body and the interior stitching. A trim colour is also available for the interior, being applied to the dashboard, seats and door panels. It uses a unique set of 10-spoke rims, which are split into 2-blade forks, totaling in 20 separated spokes. The wheels are finished with a fine line around the edge, and five bolts are fitted in the centre and wrapped in low-profile tyres. Red-brake ceramic disks are found replacing the original, smaller gray iron disks. The rims themselves can be repainted through Content Creator, although the permanent black finish gives it a darker tint/shade.

The Baller LE performs much better than the original models, as it has improved handling, acceleration rate and braking, thanks to its apparently improved V8 engine. Its traction seems to be a major improvement, as it features active terrain response and gentle suspension, meaning the ride is comfortable. Despite the ingame website's remark, it actually boasts impressive torque and offroading capabilities, competitive to the likes of the two Sandkings and other similarly-priced renown offroaders in manner of raw engine power and traction, although it suffers from mediocre ground clearance compared to others.

Though the engine model does not feature any manifolds, the engine cover displays what appears to be a single-overhead camshaft V8, fitted in a front engine, all-wheel-drive layout, longitudinally. According to the website, the vehicle is powered by a 530 bhp 5000cc V8 engine, accelerating it from 0 to 60 mph in just 7 seconds, an impressive speed for an SUV of this size. Its top speed is stated to be 160 mph, which is again very impressive. Its engine sound is similar to the one on the Tornado and the Bullet, being slightly higher pitched, smoother, and of higher performance.

Comparison between a Baller and a Baller LE. (Side and Rear)

The Baller LE on the updated Rockstar Games Social Club.

The Baller LE in the cinematic preview on Rockstar Games Social Club. 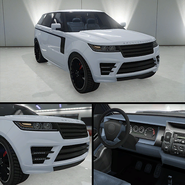 The Baller LE on Legendary Motorsport. 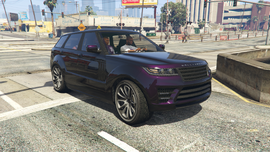 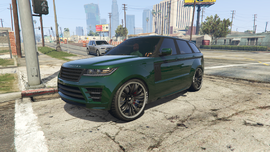