GTA Wiki
Register
Don't have an account?
Sign In
Advertisement
in: Vehicles, Vehicles in GTA V, SUVs,
and 5 more
English

Resembling the Range Rover model series, the Baller is available in two generations, which differ in design and features:

The first generation Baller's design is an adaptation of the Huntley from Grand Theft Auto: San Andreas. It is mostly based on the L322 Range Rover. However, it features a different and less luxurious front fascia, similar to that of General Motors' GMT400 model series. In comparison with the Range Rover, however, the C and D pillars of the Baller have a much steeper gradient.

The Baller has a prominent front bumper spanning the width of the car, with a trapezium-shaped intake bearing a black separation on the middle and a chrome underline. The outer edges of the bumper have circular fog lamps, together with black underlines below the lamps and thin ridges over the same, at the same height as the intake. The upper side is mostly plain with the license plate on the centre. The upper area of the car bears a chrome surrounding, housing the main grille on the centre and the headlamp units on the edges. Each lamp unit and turning signal is separated by chrome lines, with a wider line between the upper and lower lamps. The grille itself has a wide bar on the middle and two thinner ones between the main headlamps. Above the chrome surrounding, a silver "GALLIVANTER" lettering can be seen embossed on the front part of the bonnet.

On the sides, twin square-shaped vents are present on either front quarter, between the wheel arches and the front doors, close to the bonnet level. A ridged detail can be seen between the front and rear arches, along with a less-notorious ridged detail at the same level as the lamp units and door handles. Small stepsides can be seen at the bottom, as well as black mudguards. The cabin area is much angled than the Huntley and features black, polymer-covered A, B, C and D pillars.

On the rear end, the bumper features a concave formation with the same "GALLIVANTER" lettering embossed on the centre, featuring a black polymer finish at the bottom and small mouldings for the twin exhaust pipes. A trapezium formation can be seen on the centre of the rear hatch, serving as a space for the license plate and having a chrome detail on the upper side. the tail lamps are located in black housings, with a thin red strip for the third brake light.

The car is only painted in a primary colour for the body and the interior stitching. The car has eight-spoke rims, wrapped in low-profile tyres.

The front face of the car features a lot of polymer, similar to the car's real life inspiration. The base of the front bumper features a polymer layer spanning the entire width. Two thirds of the front face width and a third of its height is occupied by a trapezium formation, with the outer part being black and the inset trapezium being chrome. Outside the central areas and at about half the car's height there are large ducts that have edges contoured to the lower trapezium, main grille and headlights. These ducts have horizontal LED strips that run from the inner vertex of the ducts. The main grille is located almost at the top of the front face, being a chrome-edged trapezium which is less wide than the lower trapezium. The main grille features two horizontal chrome strips either side of mid-height. The headlamp units are linked to the grille, with the top edge coinciding with the top of the grille and bottom edge with the upper horizontal strip. The headlamp units feature two circular lamps and then an amber turn indicator lamp on the outside. The bonnet/hood features an elevated area whose edges are in line with the top corners of the grille.

The sides of the car feature wheel arches in the form of large bulges. The main body features an impressed area bounded by two chrome lines parallel to the car's belt line. Connecting the two lines at the front quarter is a vertical air duct. As with the older model, the car features black, polymer-covered A, B, C and D pillars. The wing mirrors are dominantly body-coloured but feature a black polymer accent. The roof is lightly curved.

The rear features small, wide lamp units that mostly consist of small LEDs, connected by a single chrome line similar to the ones on the sides, just over a square-shaped formation that holds the license plate. The rear bumper is mostly dominated by a polymer portion encompassing the exhaust tubes, while two red strips are seen on the edges.

Again, the car is only painted in a primary colour for the body and the interior stitching. The car has split six-spoke rims also seen on the Surano, wrapped in low-profile tyres.

The first generation Baller is quite slow and heavy, and has a wide turning radius. Acceleration is average, reaching from 0-60 in about 8 seconds, however, like every Land Rover, the Baller is capable of climbing steep hills and has a decent performance when off-roading. Another advantage is durability, it is easily one of the most durable cars in the game. The vehicle is prone to understeer at high speeds, likely due to poor weight distribution.

The second generation Baller accelerates at an average rate for an SUV, and is capable of reaching good top speed. The main weakness of the car's performance lies in its handling; the car's mass combined with its lack of traction can often lead to heavy understeer. When taken off-road however, the car's handling is better and cornering grip can allow for precise high speed driving off-road. The handling of the SUV can be quickly summarized as a level below the Huntley Sport in almost every way imaginable.

Though the engine model does not feature any manifolds, the engine cover displays what appears to be a single-overhead camshaft V8, fitted in a front engine, all wheel drive (60% front, 40% rear) layout, longitudinally.

Note that only the first generation Baller features visual modifications.

Comparison of the two Ballers. 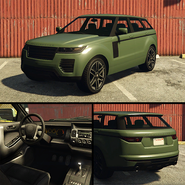 The first generation Baller in the cinematic preview on Rockstar Games Social Club.

The second generation Baller in the cinematic preview on Rockstar Games Social Club.

Several variants of the second generation Baller were added as part of the GTA Online: Executives and Other Criminals update, with an additional variant added as part of The Contract update, for the Xbox One, PlayStation 4 and PC versions of Grand Theft Auto Online.