The Ballas are a large African-American street gang featured in Grand Theft Auto V. They mainly operate in the area of Davis.

They still maintain their traditional rivalry with the Families. They usually do not attack if the player happens to walk through or pass through their territory. However, if taunted enough times, or if one fires a gun in their territory, or just because of walking near and staring the Ballas will become hostile and begin to shoot or punch the player. Their dogs will occasionally also come attack the player. The Ballas are supporters of the Los Santos Panic Basketball Team and the Boars Baseball Club, with their purple attire matching the teams' colors.

One of the protagonists, Franklin, is not on friendly terms with the Ballas as he is part of The Families. However, if he speaks to a Ballas member, they will not be aggressive at first, although they become hostile when Franklin insults them (usually the 3rd time you taunt).

They can often be seen drinking, driving cars, bikes, and even walking Dogs. Most Ballas stand on the sidewalks in groups of 3-5. Their weapons include Pistols, Micro SMGs, and knives. Members are also seen smoking cigarettes, marijuana and drinking Pißwasser.

The Ballas control the entire neighborhood of Davis. The cul-de-sac of Grove Street is a particular hotspot for activity as well as Davis Ave, Brouge Avenue and Covenant Avenue in the neighborhood. The Ballas also have a marijuana growing/packing business set up in an abandoned sawmill to the southwest of Paleto Bay. 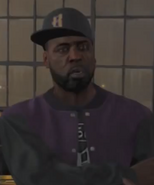 The Ballas in a gunfight

The death of a Ballas member

Retrieved from "https://gta.fandom.com/wiki/Ballas_(HD_Universe)?oldid=615155"
Community content is available under CC-BY-SA unless otherwise noted.