The Ballas are the Grove Street Families primary enemy and most influential gang in Los Santos, having been around since the 1970s.[1] They are involved in drug dealing, gang banging, prostitution, arms dealing, vandalism, degeneracy, but mainly, the cocaine trade. The Ballas are rivals with Grove Street Families and the Varrios Los Aztecas, and have ties with the Los Santos Vagos, the San Fierro Rifa, and the Loco Syndicate for narcotics, and the Russian Mafia for weapons. The Ballas also collaborate with CRASH. In addition, Big Smoke defects against the GSF to lead the Ballas with his lieutenant Ryder. Unlike the GSF, the Ballas have no reservations about making money by selling drugs; the spread of crack cocaine into the Grove Street community is part of their strategy to wipe the GSF out.

The Ballas briefly control the streets of Los Santos alongside the Vagos after Grove Street leader Sweet Johnson is gunned down and arrested. They control the influence of the Families by using crack cocaine to turn GSF members into hopeless addicts totally dependent on them. However, following the release of Sweet from prison and the return of Carl Johnson, the Grove Street Families dominate the Ballas. The Ballas' Crack Palace is heavily demolished by Officer Frank Tenpenny, resulting in significantly reduced influence by the Ballas in Los Santos. The Ballas are seen with purple bandanas, black skullcaps, knee high socks and flip-flop sandals, khaki pants and dark blue shirts.

There are four known sets of Ballas: The Front Yard Ballas, The Rollin' Heights Ballas, the Kilo Trays, and the Temple Drive Ballas.All Ballas are recognizable by their mainly purple attire, which is the identifying color for the gang. 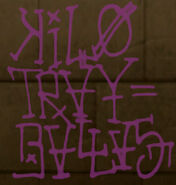 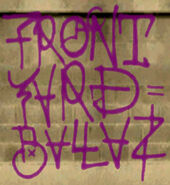 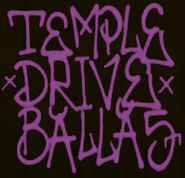 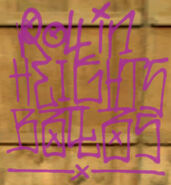 Add a photo to this gallery
Retrieved from "https://gta.fandom.com/wiki/Ballas_(3D_Universe)?oldid=115680"
Community content is available under CC-BY-SA unless otherwise noted.