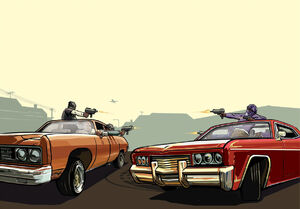 The Ballas-Grove Street War was a gang war fought between the Ballas and the Grove Street Families, led by Sean "Sweet" Johnson and his brother Carl "CJ" Johnson.

The start of the war had never been explained but it may have started when drugs were introduced to Los Santos in the early 1980s. The war seemed to be going on around the time Carl and Lance "Ryder" Wilson were growing up because Carl mentions Ryder beating up a teacher for wearing Balla colors. The Ballas started making money selling drugs while GSF leader "Sweet" refused to sell drugs, making Grove Street weaker. In the meantime, other two sets of the GSF, the Seville Boulevard Families and the Temple Drive Families split from the main gang, weakening the gang further. After the death of Beverly Johnson, her son Carl came back from Liberty City and moved back to Los Santos. The funeral was attacked by Ballas but no one was hurt or killed. Many Grove Street members had left the gang when drugs were introduced such as Big Bear and B Dup. CJ tried to seek their help but B Dup angrily refused. Big Bear had become a crack-head and a servant to B Dup. CJ and Ryder attempted to get rid of the drug dealers around their area and killed many Balla crack dealers. CJ also convinced the gang to start buying weaponry from Emmet again.

The Middle of the War

After CJ's return, while GSF members Big Smoke, Ryder, Sweet and CJ were out getting food, they were attacked by Ballas but they managed to kill all of them. The Grove Street Families got revenge on them and did a drive-by on their turf. Later on, corrupt C.R.A.S.H. members Frank Tenpenny, Eddie Pulaski and Jimmy Hernandez told both gangs about a train filled with ammunition heading towards Los Santos. The Grove Street Families managed to take the guns and all the attacking Vagos were slaughtered along with some Ballas. Later, CJ, under the orders of Sweet, took over the neighborhood of Glen Park, a Balla territory, in order to kill a GSF defector, Little Weasel. At Little Weasel's funeral, Sweet and CJ got revenge on Beverley's funeral attack and killed so-called "Front Yard Royalty" Kane. After that, CJ started taking over more Ballas turf. Sweet was going to attack more Ballas gang members under the Mulholland Intersection, but this was a trap. Big Smoke and Ryder were working with the Ballas and had betrayed their old gang. Sweet was wounded before CJ got there but he was taken away by C.R.A.S.H while Sweet was arrested.

With Sweet incarcerated and CJ away, the Grove Street lost influence and Ballas had major control over Los Santos, including main GSF stongholds, such as Ganton. The Ballas started working with the Loco Syndicate and started making more money until CJ killed heads of the Loco Syndicate T-Bone Mendez and Jizzy B and blowing up their drug factory in San Fierro, which led to the collapse of the Loco Syndicate.

The Return of the Johnson Brothers

After Sweet was released from prison, he and CJ came back to Los Santos and the Families began retaking their territory. After Tenpenny was cleared from the corruption charges, a huge riot started out in Los Santos. CJ came after Big Smoke and had to slaughter many Ballas members along with the Russian Mafia, Vagos, and the San Fierro Rifa. If the player chooses, they can take all of the Ballas territory on gang wars, making the Ballas effectively extinct.

Retrieved from "https://gta.fandom.com/wiki/Ballas-Grove_Street_gang_war_(3D_Universe)?oldid=1031688"
Community content is available under CC-BY-SA unless otherwise noted.