The Baletrailer is a hidden towable trailer in Grand Theft Auto V.

The Baletrailer is a two-axle trailer fitted with a long flatbed, featuring front and rear end walls and small side borders, purposed to carry hay bales. The base structure is composed of a tow hitch with a support beam and the rear features four square tail lights. The four bales are considered an "accessory", thus able to be added or removed via a trainer, though they will not fall out of the trailer if it is tipped.

According to the files, the only vehicle that can tow this trailer in the Fieldmaster. 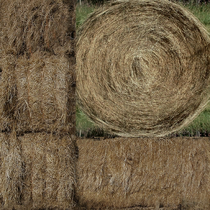 As a large trailer, the Baletrailer may force the player to drive carefully, as it will be prone to obstacles such as lamp posts, traffic lights and other vehicles. However, the ground clearance allows it to traverse bumpy terrain with no major issues. It can even be pulled over some flat cars while being towed without breaking loose or tipping. 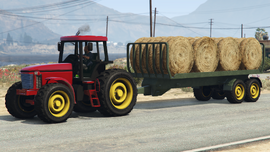