In Grand Theft Auto: San Andreas, a gray balaclava is worn by Carl Johnson during the Burglary Missions, but cannot be found outside of these missions. It can be obtained via a glitch that occurs when the player starts a Burglary Mission, enter a barber shop, selects a haircut and waits for the time limit to be over; After this, his balaclava will remain on his head for the rest of the game session. However, the Balaclava will disappear if the player gets busted or wasted, or if he changes clothes.

There is a similar mask in Grand Theft Auto: Vice City Stories worn with the Hood Outfit which can be unlocked by owning a highroller robbery empire building.

In GTA IV, balaclavas can be seen worn by Niko Bellic, Patrick McReary, Derrick McReary and Michael Keane during the mission Three Leaf Clover, and is unlocked in Niko's wardrobe after this mission. Although it is a mask, it is categorized as a hat, however, unlike a hat, the Balaclava will not disappear when Niko enters a car or when a motorcycle helmet is used. Even so, once Niko dies and comes out from the hospital, he won't be wearing it anymore. If Niko loses his wanted level with the balaclava on, he will automatically take it off and throw it on the ground. It is also available for the player skin in the multiplayer mode in The Lost and Damned in different colors.

The balaclava also appears in GTA V. Early in the Prologue mission, Michael De Santa wears one initially until he is unmasked by a bank security guard. Later, in The Paleto Score mission, Michael, Trevor Philips and the hired gunman wear them during the bank heist, but take them off when putting on the armored suits. They are also worn by the crew during The Bureau Raid if the loud approach is chosen. Upon completion of the game, the balaclava can be worn as part of the "Stealth" outfit available to Trevor and Franklin Clinton.

In GTA Online, a balaclava fashioned out of a stocking were given to players who logged in on December 24. With the release of the Heists Update, a bevvy of new balaclavas were added to the game, in a number of styles. 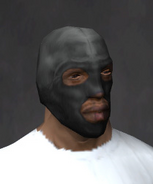 A robbery in GTA IV.

A robbery in GTA V.

Two of the new masks in the Heists Update.
Add a photo to this gallery

Retrieved from "https://gta.fandom.com/wiki/Balaclava?oldid=996112"
Community content is available under CC-BY-SA unless otherwise noted.