GTA Wiki
Register
Don't have an account?
Sign In
Advertisement
in: Missions, Missions in GTA V, Side Missions,
and 2 more

The Bail Bond missions involve Maude tasking Trevor with finding fugitives who have skipped out on bail. Capturing the targets alive will result in a reward of $10,000, while killing the targets will reward only $5,000. If the player does not have a Stun Gun, they can still capture any of the targets alive by simply running into them or meleeing them, which will cause them to surrender. The series can be first accessed by visiting Maude at her mobile home just east of the Alamo Sea.

The player will unlock the achievement/trophy "Wanted: Alive Or Alive" after delivering a living target for the first time. If they are caught instead of killed, they will be incarcerated at Bolingbroke Penitentiary.

Each bail bond mission is given by Maude to Trevor via email; each email contains a picture of the fugitive and a picture of the area in which the bail jumper is hiding. These locations are not marked on the in-game map, meaning that the player must use the provided clues to find the fugitives.

Once all four targets are caught or killed, Maude decides to retire and Trevor will no longer receive missions from her. Since getting the achievement requires you to bring at least one of them alive, a gameplay trailer shows that Trevor is putting Ralph in Maude's trailer, and capturing them gets you $10,000 while killing them only gives $5,000, bringing all 4 targets alive are the canon choices.

Game files indicate there could have been a total of ten Bail Bonds targets. Six additional target mugshots are present, all with the same name format as the four FIB records that were used. 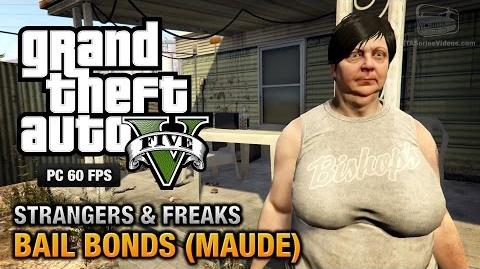