View source
watch 02:34
Fire Emblem Warriors: Three Hopes - The Loop
Do you like this video?
Play Sound
This article is for the Bahama Mamas nightclub franchise. For the apartment complex in GTA San Andreas, see The Bahamas Apts.

“Where evolution stops and the party starts! Algonquin's premier club venue for relentless party tunes and fist-pumping steroid beats. Middle-aged, married men - please take note: You will not be allowed in. (Unless you order triple bottle service with sparklers)”
— TBoGT official website.

Bahama Mamas is a nightclub franchise featured in the HD Universe. There are two clubs in operation.

The Liberty City location of Bahama Mamas is on Frankfort Avenue at the corner of Lorimar Street in Purgatory, Algonquin.

The exterior building is loosely based on The Executive Club strip club from Hell's Kitchen, Manhattan[1]. The club may also be based on the real life Pacha NYC nightclub in Hell's Kitchen, New York City.

The nightclub is described by the website peepthatshit.com to be one of three Strip Clubs in the city, the other two being Honkers Gentlemen's Club and The Triangle Club, and is the only club of the three without a "*Critics' Choice*" recommendation. The club apparently lost its license some time in 2008 when it was raided by the LCPD due to prostitution.

While listed alongside the aforementioned clubs, Bahama Mamas is not accessible in Grand Theft Auto IV because it is closed as its management has "got the painters in...", and is due for a "GRAND OPENING SOON FOR ALL!". Similarly, the club is inaccessible in Grand Theft Auto: Chinatown Wars as well in The Lost and Damned, however it is available as a bar for drinking friend activities in GTA IV.

The nightclub is a prominent location in The Ballad of Gay Tony, as the club is depicted as an accessible establishment in both trailers and pre-release screenshots of the game. In comparison to Maisonette 9 and Hercules, Bahama Mamas may be considered to be the largest nightclub of the three, boasting two large underground rooms, each functioning as the club's lounge, and the club's massive dance floor, complete with a DJ booth and an additional bar. The interior of the club also includes a manager's room and store room, both accessible from the room containing the dance floor. However, other than by exploiting glitches[2], the club is only accessible and populated by clubgoers during Boulevard Baby.

According to the official website of The Ballad of Gay Tony, middle-aged and married men are not allowed in the club, unless they order a "triple bottle service with sparklers". The club is originally owned by Vic Manzano and his girlfriend Monique, but Gay Tony additionally has a stake in the club. In the mission Boulevard Baby, Rocco Pelosi and Gay Tony instruct Luis Lopez to seduce Monique at the club while Vic is in Las Venturas; the plan goes awry when Vic returns early to find Luis and Monique engaging in oral sex, leading to a shootout at the club that forces the establishment to shut down. 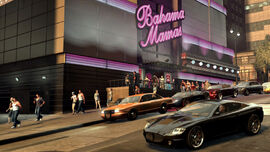 The modified entrance of the club in a pre-release screenshot of TBoGT. 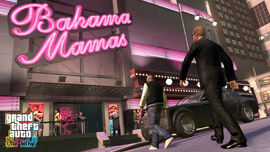 Tony and Luis outside the club. 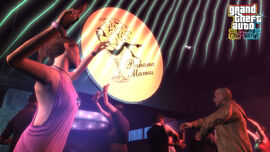 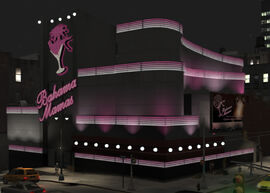 The exterior of Bahama Mamas in Grand Theft Auto IV. 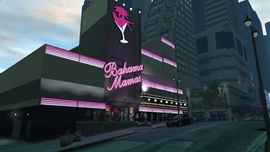 The exterior of the club in The Ballad of Gay Tony. (Mission:Boulevard Baby) 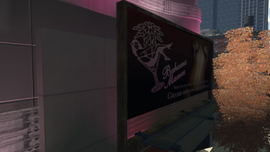 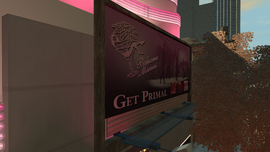 Frankfort Street "Get Primal" billboard[4] in The Ballad Of Gay Tony. 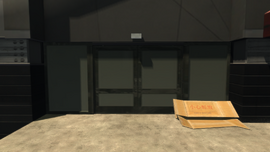 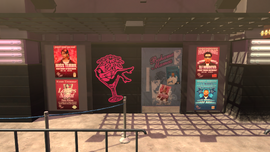 Front doorway with posters[5] in The Ballad of Gay Tony. 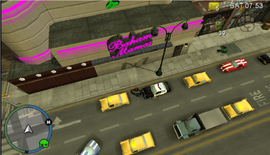 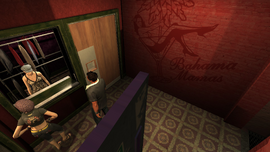 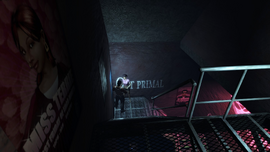 Stairs leading down to the party. 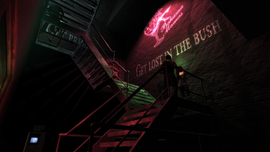 Stairs on the bottom. 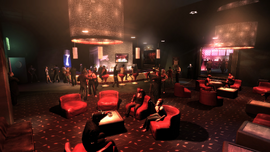 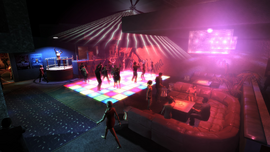 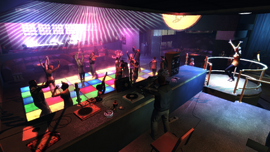 View from the DJ's booth. 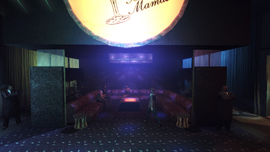 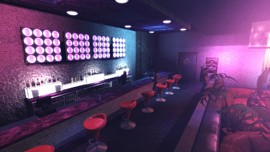 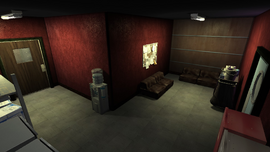 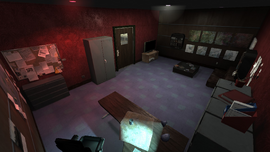 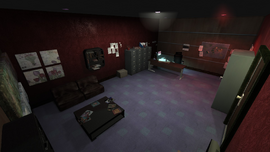 The building is a flipped version of the Barnes & Noble Booksellers store at Wilshire Boulevard in Santa Monica, California[6].

It is inaccessible to the players although, like GTA IV, it is an available location for drinking with friends in GTA V.

The club was accessible via exploiting a glitch[7] and there is a fully animated and furnished interior of the club indicating it, like Split Sides West, was cut from GTA V or may be intended to be used in future Grand Theft Auto Online updates. It is very similar to the Bahama Mamas layout, but it does not play any music. After the Heists Update however, one can hear music coming from inside the club when getting close to the building from 20:30 to 03:30 at night. A Bahama Mamas t-shirt was made available to Grand Theft Auto Online players who logged in during the Sunday Drivers Week event.

In the GTA Online: After Hours update, Bahama Mamas is a rival nightclub to the Online Player's nightclub. The club seems to hire various criminal gangs to deliver and possibly steal supplies during certain Nightclub Management missions. 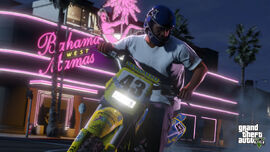 Franklin Clinton in a pre-release screenshot showing the nightclub. 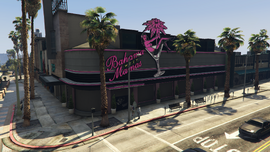 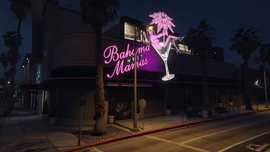 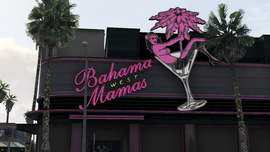 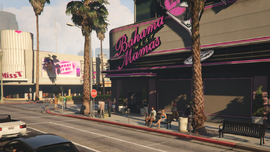 The front of the building with the drinking activity marker seen in yellow. 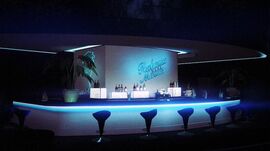 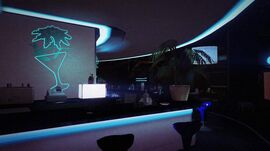 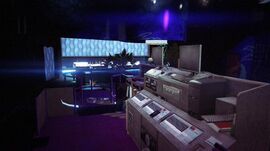