chopper_1
“As every Bagger owner will tell you without a trace of all-consuming regret, "It's a great bike for cruising". Which is another way of saying "It's a great bike for not going anywhere quickly or efficiently". So deep into grandpa chic it comes full circle and achieves gangland charm, this is the bike for you if you can't make up your mind and don't care how you look in the meantime.”
— Southern San Andreas Super Autos description.

The Bagger's design seems to be based on the 2013 Harley Davidson Touring Road Glide Custom, albeit with much smaller and basic batwing fairing and a gas tank that instead resembles those used by Victory Motorcycles.

The design of the vehicle is very similar to the Freeway, only featuring minor changes to its bodywork. The front section features a painted mudguard with chrome trim on the lower borders, attached directly to the chrome forks. The upper area is predominated by a rounded fairing with dual circular headlights behind a glass casing and a glass visor on top, while the handlebars are attached to the upper clamp/plate by two support frames.

The main body features a black dual frame with silver/chrome frame and foot pads on the front, as well as a wide fuel tank similar to the one of the The Lost and Damned iteration of the Nightblade, rounded panels beside the oil tank and a black leather seat similar to the one of the Wolfsbane, with room for two occupants. The engine bay features an oval-shaped air filter and two exhaust pipes on the right side, which come from each cylinder block and merge into one single pipe. The top of the fuel tank features a single black analog dial, where in the enhanced version, uses the "Chopper Bike" dial set also shared with the Daemon and the Police Bike.

The rear section consist of a curved fender with part of the leather seat over it, silver/chrome frames on the sides and a single square tail light on the rear end, while large panniers are seen beside the rear fender, with the right one holding a license plate. The rear wheel is connected to the rest of the vehicle by a black two-sided swingarm, supported by two suspension springs attached to the side frames and having small foot pegs for the passenger. The chain drive and sprocket are seen on the left, while the exhaust pipe is seen on the right.

The bike spawns in a variety of single colors on the entirety of the bike, being the fenders, fairing, fuel tank, side body panels and side panniers. It also uses a set of chromed rims similar to the "Loops" rims available in Los Santos Customs and low-profile tires, with the rear one being slightly wider.

* Plates are unavailable if a custom "Saddle Bags" modification is installed.

A Bagger Owner's Manual found in the Motorcycle Club Warehouse in GTA Online. Note the manual incorrectly displaying the manufacturer as Principe. 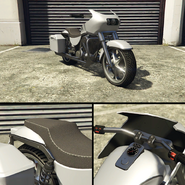 The Bagger on the updated Rockstar Games Social Club.

The Bagger in the cinematic preview on GTA V Rockstar Games Social Club.

The Bagger in the cinematic preview on GTA Online Rockstar Games Social Club. 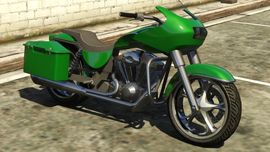 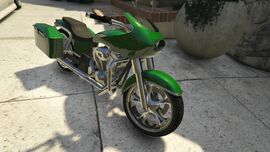 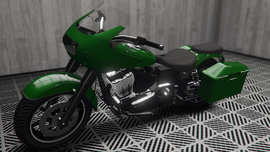