GTA Wiki
Register
Don't have an account?
Sign In
Advertisement
in: Missions, Missions in The Lost and Damned
English

Jim: "The way I see it we got two choices. Either, we buy a big tube of grease and prepare to take it from these fat pigs for the rest of our lives."
Johnny: "Or?"
Jim: "Or, we head over to the clubhouse, close to where I happen to know they got themselves set up, and we show them that we're not quite the bitches they think we are."
—Jim Fitzgerald and Johnny Klebitz.

Bad Cop Drop is a mission in The Lost and Damned. It is given by Jim Fitzgerald to Johnny Klebitz.

Jim is still angry about the cops, Ed McCornish and Jimmy Matthews, who harassed them at the end of the last mission. So he wants to show them a thing or two about The Lost MC. Johnny agrees and goes along with the plan and lures the bent cops into a trap in Acter Industrial Park.

When Johnny arrives at Jim's location, a cutscene ensues. Jim is understandably worried about the crooked cops who are currently trying to blackmail the two of them. The way Jim sees it, there's two options here. The first and most obvious is to pay the cops off as they want before preparing to go to war with their crooks for the rest of their lives. The second, more desirable alternative is to kill the cops to teach them a lesson - you can't push The Lost MC around. Johnny feels tempted at the first option but, seeing that Jim's two crooks are a bigger threat, agrees to go on with the latter, killing the crooked cops (as Jim knew Johnny would say so) and before Johnny heads to the location, he hands him a new gun. Jim will take the lead on this trip and bring Johnny to a location where the two cops are currently sitting in a car.

As Jim approaches, McCornish and Matthews makes fat jokes about him and asks for payment. Jim responds by punching McCornish in the stomach, throwing his coffee at Matthews, and stealing his doughnut before running back to Johnny's location, mounting onto his bike. From here Johnny will ride somewhat slow, leading the police to an ambush site in the Acter Industrial Park. While leading the crooked cops there, the player is told holding the "cinematic camera" button will allow them to see from the point of view of the cops. If the player allows McCornish and Matthews to get too close, they will open fire on Johnny and Jim with SMGs. Once all four characters arrive on scene, other Lost MC members are found lying in wait for the cops. Once here the player must seek cover and kill all of the cops and crooks in the area. After they're all dead, Johnny is told to leave the scene. Due to the gunfight the player has acquired a two-star wanted rating. Once evaded, the mission ends successfully.

"After several incidents of wrongful shooting by the Liberty City Police Department this year, it seems that the shoe is finally on the other foot. The bodies of several police officers were found in Acter Industrial Park earlier. Amongst them, Detectives Jimmy Matthews and Ed McCornish."

"Sources within the District Attorney's Office have revealed that there were multiple Internal Affairs investigations against these officers who were suspected of involvement in several corruption scandals. At the time of their death, the two were thought to be investigating the Angels of Death Motorcycle Club. An AODMC spokesman denied any club involvement in illegal activities. "This is typical of the LCPD, a bent cop gets what's coming to him and they blame it on decent hardworking American bikers."" 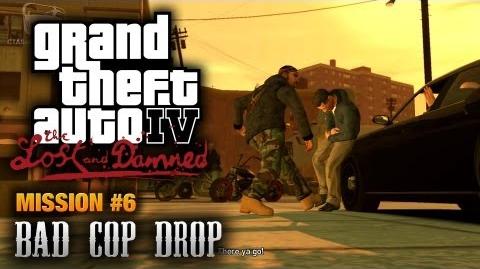