Standard White - 100%
“The original race version of the BR8 was a complicated machine. Constructed from over four hundred separate controls, it required inhuman dexterity and a PhD in astrophysics just to start the engine. Benefactor have simplified this into a handful of brightly colored buttons and a colossal insurance premium. Killing yourself has never been so user-friendly.”
— Legendary Motorsport description.

The Benefactor BR8 is an open wheel car featured in Grand Theft Auto Online as part of the Los Santos Summer Special update.

The BR8 is modelled after the 2011 Red Bull RB7, seen in the chassis design and the nose, while the stock front wing is based on the 2009 Red Bull RB5.

The BR8 features a very narrow, low-profile design, having the distinctive flat, elevated nose with the large wing on the front, featuring multiple fins. The driver compartment is open, with the small side intakes and the rear one above the cabin, as well as the large rear wing with the single tail light. The entire underside of the vehicle is Kevlar plated, using a unique texture in comparison to the carbon-fibre plating to the other Open Wheel vehicles. Its interior uses a unique and modernized steering wheel with digital display, which is share with the DR1.

The primary colour of the vehicle is applied on the body, while the secondary colour is applied on the upper fins of the front wing, the panels below the side intakes and the vertical fins of the rear wing. Also, similar to vehicles like the Drift Tampa or the Hotring Sabre, the BR8 features the use of racing slicks for the wheels, along with its own custom "Race" wheels.

In addition to its already impressive speed, the BR8 also has KERS, allowing the driver to increase their speed even further by activating the boost, in a similar manner to the Lectro and the Vindicator. The boost lasts for four seconds and it takes about six seconds to recharge to its full capacity, but it does not have to be full to activate it. In order for the boost to recharge, the vehicle needs to begin slowing down to let it charge. Stopping the vehicle, accelerating, or reversing will prevent the boost from recharging.

* There are 10 liveries available to be applied, most of which reflect those that were used by various Formula One teams from the early to mid 2000s.
** Vehicle is limited to Wheel Color, Bulletproof Tires and Tire Smoke. Custom Wheels are restricted to the options listed above. 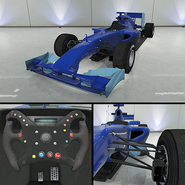 The BR8 on Legendary Motorsport.

The BR8 in the cinematic preview on Rockstar Games Social Club.