GTA V
“The classic bike for tooling the neighborhood or doing a double peg grind. Reinforced steel, super comfortable seat that wont cut off the circulation to your scrotum too bad. (i.e. for wimps!) A great deal for the cash-strapped.”
— Pedal and Metal Cycles website.

The BMX, as implied, is a BMX bike sporting a compact frame, wheels, and a sturdy handlebar.

The BMX in GTA San Andreas features a small design with pegs on the rear wheel, as well as a bell that is used with the horn button. The vehicle may come either in a single tone or a two-tone color, with the secondary one applied to the vertical frames.

In Grand Theft Auto V and Grand Theft Auto Online, the BMX has almost the same design from GTA San Andreas but looks even smaller. This version only has one brake on the right handlebar and does not feature a bell. The BMX comes in a variety of colors for the frame, with a secondary color that seems to be non-existent (usually set to black, except for one set with white). [citation/verification needed]

Despite the bicycle's description stating it has pegs, the in-game model does not feature any. 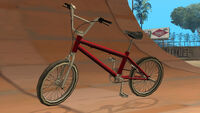 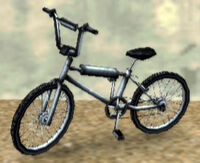 One of the BMX's major advantages is its maneuverability. In addition to its compact size, the BMX also allows the player to execute super high bunny hops, along with the standard fare of wheelies and stoppies. In Grand Theft Auto: Vice City Stories, players can only execute a low bunny hop using the BMX.

The BMX's top speed is the middle figure for the bicycles in the game (ahead of the Bike and behind the Mountain Bike) and is not especially fast. The BMX is not suited for off-road cycling or as a getaway vehicle.

The BMX in GTA San Andreas is indestructible, but the BMX in GTA Vice City Stories can be rendered unusable by burning it with the Flamethrower/Molotov or even an explosive.

In Grand Theft Auto V and Grand Theft Auto Online the BMX is not as fast as the three race bikes and the Scorcher, but is faster than the Cruiser, which is the slowest bike in the game. The BMX is quite small, light and maneuverable, making it easier to perform stunts such as bunny hops and wheelies.

The BMX is not indestructible, and the wheels can be dismounted if the player collides with another object or vehicle at high speed. 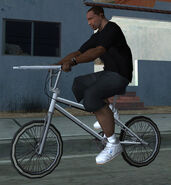 Artwork of an early design of CJ on a BMX for GTA San Andreas. 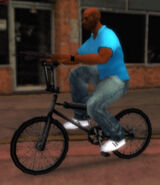 The "pink" variant of the BMX in GTA Vice City Stories.

Victor riding the pink variant of the BMX.

A BMX in the Grand Theft Auto V trailer.

An NPC riding a BMX. 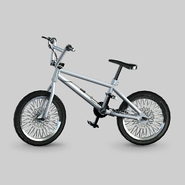 The BMX on Pedal and Metal Cycles.

The BMX on the updated Rockstar Games Social Club.

The BMX in the cinematic preview on GTA Online Rockstar Games Social Club.

The BMX in the cinematic preview on GTA V Rockstar Games Social Club.