Yes (GTA Vice City Stories, GTA V and GTA Online)
Parked (3D Universe)
“Super reinforced shocks - perfect for cushioning when you are jumping sand dunes and landing with such ferocity that you bite your tongue in two.”

The Injection (formerly named BF Injection) is a dune buggy and off-road coupe that appears in the 3D Universe, Grand Theft Auto V and Grand Theft Auto Online. Following the release of GTA V, the BF name is labeled as a manufacturer.

In Grand Theft Auto III, Grand Theft Auto: Vice City, Grand Theft Auto Advance, Grand Theft Auto: Liberty City Stories and Grand Theft Auto: Vice City Stories, the vehicle resembles a slightly enlarged Meyers Manx, a kit car made from a Volkswagen Beetle. It was designed by Bruce F. "BF" Meyers and was at one point manufactured by his company, B.F. Meyers & Co. (hence the BF part on the name). The vehicle retained the generally exaggerated design, with a rounded body, large wheels, open cabin and a rear engine. The GTA III rendition does not have headlamps (despite emitting light beams from its front fenders), but latter games rectified the issue with the addition of two circular headlamps, as well as additional hi-beam lamps mounted on the roll bars. In GTA Advance, the BF Injection retains its curvy profile and rear engine, but has a closed top and doors. The BF Injection can be seen with a wide array of primary body colours, with a secondary colour on the lower trims, generally painted in grey/silver.

In Grand Theft Auto: San Andreas, the vehicle assumes a sleeker, more angular look, appearing to resemble VW Beach Buggies build around the 90s. It features square-shaped lamps, as well as a tighter, narrower rear end. The vehicle may feature two-tone body colours, in addition to the body-and-trim colour schemes seen in the earlier games. It uses MMT tyres.

In Grand Theft Auto V and Grand Theft Auto Online, the Injection is seemingly based on a 1963 VW Fusca Buggy (though it has a rear split window much like earlier Beetle models), which has been modified to cope with off-road use (into a Baja Bug).

The vehicle assumes a shorter, altered design with a relatively similar height to that of the 3D Universe iterations. The front of the car features a large push bar with a buggy-style under-body protection, with a set of circular headlamps behind the push bar. The upper area of the car has a narrow front with two inset formations.

The sides of the car's body lack any extra formations aside from the large, flared arches that have been fitted to the car. The buggy does, however, feature chrome wing mirrors with chrome lines passing through the whole car. The cabin is relatively small and features an ovular rear window vertically split into two equal halves. The engine is sat on a tube frame with a chrome finish, which may have a long antenna mounted towards the right, at the top. To make the vehicle road legal, it features two circular tail lamps and a central area to mount a license plate. The engine may have a central exhaust tip that points upwards.

The interior of the car is heavily rusted with a seemingly damaged leather finish on the seats and the doorcards, as well as a broken-down dashboard with missing gauges, aside from a functional speedometer.

In GTA III, the BF Injection's performance is generally above average. The vehicle fares well in speed, but cannot match the speed of sports cars. Handling is adequate, with a wide wheelbase and a light weight. Despite its off-road design, the GTA III rendition features stiff suspension and a high center of gravity, leaving the vehicle prone to rollovers. In GTA Vice City, the BF Injection's suspension is improved for better off-road driving, but it may still flip forward and land on its roof. In GTA Liberty City Stories, it exhibits poor handling on sand, though the version in GTA Vice City Stories is the opposite as it's the chosen vehicle for the Beach Patrol side-mission. All renditions of the BF Injection are powered by a small turbocharged V8 engine, except the GTA San Andreas rendition, which is powered by a flat 4-cylinder engine. The BF Injection in Liberty City Stories is the only car in the game to have a rear-mounted engine.

The GTA San Andreas rendition features a more powerful engine, and a redesigned form has a shorter wheelbase, increasing the risk of spinouts. It is noticeable bottom-heavy and somewhat rear-heavy, like the Bandito, which severely reduces the risk of rollovers. Unlike the Bandito, the BF Injection possesses responsive and quick steering, with a touch of oversteer. Its grippy MMT dual-purpose tires also boost its off-road capabilities. It has a very powerful rear-drive, along with a much stronger engine than previous renditions. The vehicle will wheelspin violently, yet only briefly, when the gas is pressed. This can be seen by tapping the gas quickly; the wheels will change orientation, but the vehicle will not move much in response.

In Grand Theft Auto V and Grand Theft Auto Online, the BF Injection still performs generally well. It has decent acceleration and an average top speed, and is generally stable while turning. Being a purpose-built off-road vehicle, it does perform very well off the asphalt, with its acceleration and speed much more noteworthy. The addition of a covered roof helps in recovery from rollovers. While the rear-mounted engine does generally keep it safe, the rest of the vehicle is very susceptible to deformation damage, and can only take one or two hard crashes before any wheels become stuck. Bulletproof tires are highly recommended for it to withstand gunshots.

The Injection features a rear-mounted, air-cooled single cam Flat-4 engine with two carburetors, powering the rear wheels in an RR drivetrain layout. The engine emits a low-revving and loud sound, possibly attributed to its worn condition. 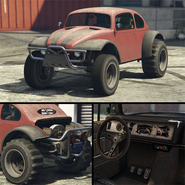 The Injection on the updated Rockstar Games Social Club.

The Injection in the cinematic preview on Rockstar Games Social Club.

In the mission "Cut Throat Business" (GTA San Andreas), a unique black and red BF injection is used to transport Carl Johnson and Madd Dogg to meet OG Loc. Because the player is unable to store this BF Injection in any garage during the mission (as it simply disappears after), it can only be acquired by killing Madd Dogg, thereby failing the mission, and taking the buggy to a safehouse garage. Its performance is no different to the standard BF Injection. 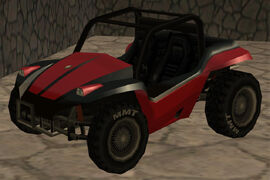