Not to be confused with AT-400, a passenger aircraft in Grand Theft Auto: San Andreas.

Standard White - 100%
“When the history books are written, the BF400 will be seen as our age's greatest expression of the pioneer spirit. No other advance in off-road engineering has broughty us this close to our forefathers' dreams of a land where no area of pristine wilderness is safe from noise, smoke, gas and discarded bottles of Pisswasser. Welcome to the brave new world.”
— Southern San Andreas Super Autos description

The BF400 (formerly "BF-400") is a motorcycle featured in Grand Theft Auto: San Andreas and Grand Theft Auto Online as part of the Cunning Stunts update. It is manufactured by Nagasaki in GTA Online.

Based on a Suzuki Bandit, the bike's design is comparable to the PCJ-600, with a slimmer body design, thinner wheels and an older appearance. Like the FCR-900, the bike comes with three different body designs:

Three different exhaust pipes are also available, but all exhaust pipes are situated on the right side of the bike. The bike is seen with a variety of colors for the fenders, front fairing and fuel tank. It uses a set of Wire wheels.

The bike returns in Grand Theft Auto Online as an enduro bike inspired by the KTM 450 Rally, as the front faring and light configuration are almost identical.

The bike appears as a modernized counterpart of the Sanchez, where the front area features upside-down forks with the fender attached to the fork legs, as well as a large curved fairing with small ducts on the upper sides and a black vertical panel with chrome trim around it, holding the three stacked circular headlights. The handlebars are attached to the upper plate by dual supports and feature a central frame between the handlebars, as well as small covers intended to protect the rider's hands. The vehicle uses a set of black independent casings over the handlebars, which use the same "Sport Bike" dials from motorcycles such as the Bati 801 and the Akuma.

The main body is partially covered by the front fairing and has a grilled section with a carbon-fiber trim over the intercooler, while the lower area is protected by a carbon-fiber fairing. Part of the rear side is covered by protective frames, while the upper side is occupied by a small fuel tank and the black long seat. The enhine bay features a single exhaust pipe running through the righ side.

The rear area uses a long rear fender with what seems to be additional fuel tanks mounted on either side, along with a small tail light below the end of the fender. The double-sided swingarm is supported by a single suspension spring with a gas cylinder next to it, while a set of frames holding the passenger foot pegs can be seen beside the swingarm, similar to the Sanchez. The exhaust muffler located on the right side, attached to the right fuel tank.

The primary color of the bike is applied on most of the components, the grilled section in front of the intercooler, part of the rear fender and side fuel tanks, and the rear fender end, while the secondary color is applied in the form of single stripes on the front fender, front fairing and handlebar covers, the central handlebar frame, the end of each fork leg, the lower side of the front fairing, the main frame, most of the rear fender and the side fuel tanks. The bike uses the same wheel design as the Sanchez and the Enduro, being an off-road derivative of the "Wires" rims available in Los Santos Customs. 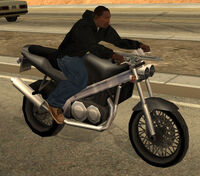 The BF-400 is likely the slowest of all sport bikes in the game, although it may attain the speed of the PCJ-600, albeit after a longer period of acceleration. Its more compact construction and lighter weight, however, allows the bike to corner better than its two other counterparts. Its superior suspension makes it a better choice offroad compared to the PCJ-600 or FCR-900; however, it cannot compete with the Sanchez in this regard.

The bike features a parallel-twin engine, as identified by the single bank of cylinders and two pipes on the exhaust manifold.

As expected from a rally bike, the BF400 has excellent performance when travelling at high speed. While acceleration may not seem much, top speed is achievable relatively easily thanks to its amazing combination of light weight bodywork, agile handling and absorbing suspension. Suspension is one of the best, if not the best in terms of allowance; the bike can bounce and absorb the impact of large jumps without throwing the player off, better than the Sanchez and Enduro. Interestingly, when fully upgraded, the BF400 has one of the highest top speeds of any land vehicle despite being a dirt bike.

The BF400 is powered by a single-cylinder engine and coupled to a 5-speed gearbox. The engine sound appears to be a higher-revving, higher-pitched variation of the one used in the Sanchez and the Enduro. 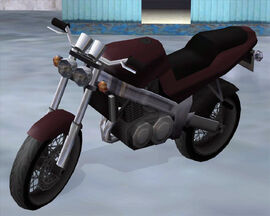 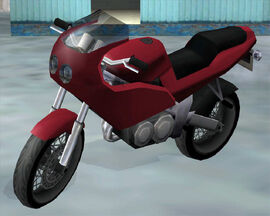 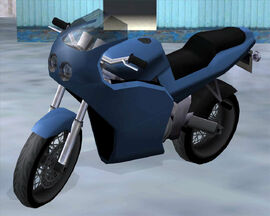 A BF400 shown in the promotional concept art. 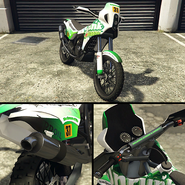 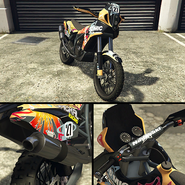 The BF400 on the Rockstar Games Social Club.

The BF400 on the updated Rockstar Games Social Club.

The BF400 in the cinematic preview on Rockstar Games Social Club.