"Dealing in life's ups and downs"

“Dealing in life's ups and downs.”

BAWSAQ is one of two stock exchanges available in Grand Theft Auto V, the other being Liberty City National Exchange (LCN).

One of their offices is located at the corner of Kunzite Street and Burlesque in Star Junction, Algonquin.

BAWSAQ is often mentioned in Weazel News reports and by some people in Grand Theft Auto IV; however, the website is not available in the game.

In Grand Theft Auto V, it takes on a much larger role, where the player can visit the BAWSAQ website and purchase stocks.

It is a parody of the real life stock exchange NASDAQ, which is situated in a similarly designed Condé Nast Building in Times Square, New York City.

These are the companies that are listed on the BAWSAQ as seen on the LED display outside the stock exchange office or on various news ticker displays around Star Junction. 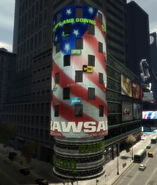 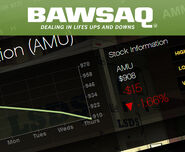 Dealing in life's ups and downs.

Entrance of the BAWSAQ branch in GTA V.