A B-11 Strikeforce in Grand Theft Auto Online.

"In these days of high payload drones and live-combat autopilot, the fine art of low altitude close air support is dying. But for those who still care about the personal touch, the B-11 Strikeforce is here to help you deliver. This masterpiece was built to walk one very fine line: high enough to dodge the rippling inferno of its own explosive cannon fire, but low enough to see the looks on their faces.
Please note: This aircraft is excluded from Pegasus Lifestyle Management and must be stored in a personal hangar."
―Warstock Cache & Carry description.

The B-11 Strikeforce is a military attack plane featured in Grand Theft Auto Online as part of the After Hours update, released on August 7th, 2018, during the Dixon Residency Week event.

The B-11 Strikeforce is based on the Fairchild Republic A-10 Thunderbolt II "Warthog", with the tail design of the Northrop YA-9, the aircraft prototype which was proposed as part of the design competition with Fairchild Republic's prototype A-10. Like its real-world counterpart, the Strikeforce possesses a large Gatling-type autocannon resembling the GAU-8 Avenger mounted on its undercarriage, although it is centred rather than offset to the left as with the A-10.

The plane features a front landing gear offset to the right and a unique warning on the gun mounting.

The B-11 Strikeforce handles similarly to other jets with an acceleration similar to the Hydra but with a lower max airspeed. Below 900 feet the B-11 only travels at about 120 knots, while above 900 feet it can reach about 160 knots. Despite its slow airspeed the jet has a very good maneuverability, with a very tight turning circle. It can turn tighter than the Pyro, making it a strong contender in a close dogfight. The aircraft also has very strong air brakes making it easy to quickly slow down while still maintaining maneuverability. Similar to the V-65 Molotok, the B-11's pilot can also hold the air brake for longer than normal, preventing the engines from shutting down as quickly. The aircraft also takes a slightly longer time for the engines to fully spin up and become operational when first starting the aircraft.

The B-11 Strikeforce is one of the most durable airplanes. It can withstand up to five homing missiles or standard explosions before being destroyed with the sixth. It can also survive a direct hit from the RPG. However, the B-11's control surfaces are not resistant and will be broken off if caught in the splash damage of any explosion, likely making the aircraft uncontrollable.

Against the Heavy Sniper Mk II with explosive rounds, the B-11 can withstand only four hits, exploding on the fifth. This gives the pilot the ability time to eject or dive out of the sniper's line of sight. Just like other sources of explosive damage, the explosive rounds can knock off the control surfaces from the aircraft.

The aircraft flies just fast enough to out-turn most homing missiles but will struggle to fly faster than missiles fired by the Chernobog or the Oppressor Mk II.

The B-11 can equip countermeasures, with a choice between chaff, flares, and various colors of smoke.

When purchased, the B-11 Strikeforce comes painted in the following colors by default: 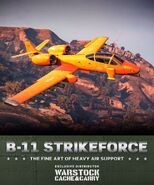 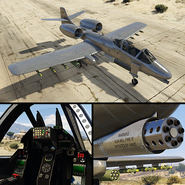 The B-11 Strikeforce on Rockstar Games Social Club.

Close-up of the front.

Retrieved from "https://gta.fandom.com/wiki/B-11_Strikeforce?oldid=1185419"
Community content is available under CC-BY-SA unless otherwise noted.