The Kraken Avisa is a sub-aquatic vehicle featured in Grand Theft Auto Online as part of The Cayo Perico Heist update.

The Avisa is likely based on the U-Boat Worx NEMO and SEAmagine AURORA-6, seen in the front end and bubble cabin.

The Avisa distinguishes itself from the Submersible and Kraken by its compact design and the ample room for four occupants. On the front, the vehicle features two ends fitted with carbon-fiber details and glass cases, where the twin circular lamps are housed in. A chrome defense bar is mounted on these both ends, intended for protection against collisions. The front of the cabin follows the same bubble-like shape as the other two submersibles, but there are multiple circular lamps around it, along with additional twin circular lamps below.

On the sides, there are circular openings and side rear intakes housing small propellers, with the frontal ones being intended for the yawing capabilities, the middle ones for depth adjusting and the rear ones for propulsion, along with various markings displaying the vehicle's name and the manufacturer emblem. The cabin uses top-hinged glass access doors and silver/chrome frames separating each section of the cabin, along with a carbon-fiber frame passing over it. The rear area curves down to the rear end and has a vented section on the upper side, together with a carbon-fiber detail behind the cab area.

The rear end of the vehicle has a single red light strip and a thin vented section above it. The lower area has the corresponding open sections for the propellers and triangular fins below, as well as a rear defense on the lower center. Various markings displaying the vehicle's name and the manufacturer emblem can be seen here as well. Its underside mostly consist of a carbon-fiber bottom of the cabin, the lower frames of the vehicle and what seems to be the ballast tanks.

The interior of the submersible uses a set of dials derived from the V-65 Molotok, with the main dials above and the smaller display gauges below it, placed over a triangular-shaped panel that also mounts the controls on the left side. The primary color of the vehicle is applied on the body, while the secondary color is applied on the interior. 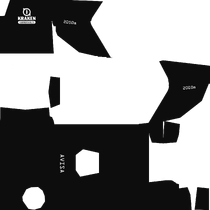 While the Avisa has an advantage of being able to carry four players (unlike the Kraken or Submersible) it is also significantly slower than any other submarine in the game. Players also require to correct its pitch angle and descend at the same time, as it tends to angle upwards when going at full speed. The lack of weapons or defense makes it very vulnerable to most weaponized vehicles, particularly the Kosatka, the Stromberg and the Toreador.

If the player has purchased the optional sonar station for their Kosatka, the Avisa gains the sonar function also. Pressing the sonar button will reveal the presence of the daily Hidden Caches which can be collected in the Avisa. 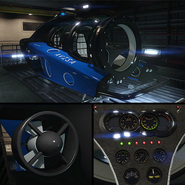 The Avisa on Warstock Cache & Carry.

The Avisa in the cinematic preview on GTA Online Rockstar Games Social Club.