Rod Brogan
“Shoot me in the head before they take me. You gotta destroy the brain, or they'll bring it back to life in a jar.”
— Avi Schwartzman to the GTA Online Protagonist in Pacific Standard - Signal.

He is located on a small island off the west coast, surrounded by government agents in a small shack in the center of the island. The players are required to ride Seasharks to the island and take out the government agents. The players then need to escort Avi to a drop off after losing the cops where Paige takes in Avi. After this, the mission will end.

“He's certainly a skill fit. Whether he understands the culture we're trying to create down here's another thing.”
— Lester Crest to the GTA Online Protagonist about Avi in the hacker role selection in The Diamond Casino Heist.

In 2019, the government put out Signal Jammers that bother Avi as they interfere with his radio broadcast. Once the first Signal Jammer is destroyed, Lester messages the player, informing them that Avi is grateful for their efforts and promises to provide his hacking skills should they destroy all of the Signal Jammers for him. The player can then unlock him as a hacker for The Diamond Casino Heist after destroying all 50 Signal Jammers.

According to Moodymann in The Data Contract, 'he worked for whoever hit the casino', confirming that Avi's return as a hacker is canonical.

He takes 10% from the final take in the Diamond Casino Heist and is the most expensive hacker available.

Avi provides 3 minutes and 30 seconds in the vault upon entering undetected. This is reduced to 2m 26s if the team is detected.

“Okay, Avi. Just concentrate. You didn't die on that godforsaken little island, and you're not gonna die here. You're gonna be on your boat, deep sea fishing again, in no time. One last job.”
— Avi Schwartzman uploading Don Percival's secret files.

In 2021, after hearing about KDJ and Sessanta making moves in Los Santos, Avi reaches out to them with a contract that he doesn't trust his associates with, to rob Don Percival, the CEO of Merryweather Security. The player is tasked with breaking into Percival's secret bunker, stealing four hard drives that contain sensitive information and delivering them to Avi at Elysian Island. Once there, Merryweather attacks the site and the player must protect Avi while he uploads the data, using equipment stolen from Merryweather during their planning work. The contract ends once all data is uploaded, and Avi hands the player their payment before walking off. 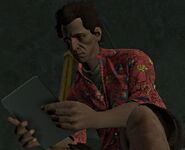 Avi in The Diamond Casino Heist.

Avi in The Data Contract finale.