View source
watch 01:07
GTA Lore: Avenger
Do you like this video?
Play Sound

An Avenger with folded proprotors in Grand Theft Auto Online.

Standard White - 100%
For the motorcycle in Grand Theft Auto: Liberty City Stories, see Avenger.
“So you’re an aspiring criminal and you and your crew have been tasked with staving off an existential threat, but you need just the right vehicle. How about a vertical take-off, turreted, flying fortress/experimental weapons lab in the sky/death-spitting collateral damage producer that practically flies itself? The Avenger is all these things and more. Store it in your Facility, get it fitted out with a Vehicle Mod Shop, a Weapon Workshop, and a suite of ferocious weapon upgrades, and you’ll soon be wreaking a whole new level of havoc without ever having to land.”
— Rockstar Newswire.

The Mammoth Avenger is a plane featured in Grand Theft Auto Online as part of the Doomsday Heist update.

The Avenger is a tilt-rotor aircraft based on the V-22 Osprey, but replacing the side doors with access ladders, as well as a narrower and higher upper section where the wings are rotated (also omitting the capability for the section to rotate 90 degrees for storage).

The aircraft is depicted with a very large fuselage, where the front section features a small camera pod below the nose and various devices on the sides that look like cameras and sensors, as well as large windows for the cockpit area, two access ladders on the rearmost section that operate similarly to aircraft such as the Shamal and the Titan, and underside hatches for the nose landing gear, which are located right after the mounted camera.

The main section of the aircraft consists of the cargo hold with two small square windows on either side and bulky lower portions that house the main landing gear, located on the rearmost section of the same lower portions. The top of the aircraft has an elevated section that mounts the wings, which are slightly angled forwards. Each wing features black sections on the front, large ailerons, and tilting engines fitted with three-bladed proprotors and rectangular exhausts. The proprotor blades also feature luminous tips on both surfaces, so when flown at night, they draw clearly visible circles of green light.

The rear of the aircraft consists of the large ramp door for the cargo hold and a large tail/empennage, the latter having a wide horizontal stabilizer with a single elevator and angled vertical stabilizers, as well as a single navigation light on top of the left vertical stabilizer. There are also numerous markings that denote its usage by the United States Marine Corps, under the squadron identifier "AVG-426".

The interior of the cockpit is spacious and uses the "Lazer" dial set from the P-996 LAZER, Hydra and Besra, arranged in a way where the screens are centered to the seats and the functional dials centered to the whole aircraft. The central instrument panel features numerous switches and another screen on the left side, while the "Gear Up/Down" displays are located on the leftmost side of the instrument panel. Additional instruments can be seen on the windshield separation and above the cockpit area. Directly behind the seats, there is a marked door that leads to the cargo hold, as well as tall steps from the access doors.

The aircraft is mostly painted in a primary color for the fuselage, while the lower surfaces of the fuselage, wings and engines are painted in a secondary color. It uses a set of industrial wheels derived from trucks such as the Benson, Mule and Phantom.

The Avenger's cargo hold interior is large and is fitted with a CCTV monitor, various storage boxes, and other assets the player can purchase. There is a secure door at the front that leads to the cockpit, as well as a side door for the exit and the rear ramp door for players and selected Weaponized Vehicles. Like the Mobile Operations Center, a blue corona may appear in front of the cargo ramp door when stationary, and one can exit the vehicle or go into the cabin. Selected Weaponized Vehicles enter through the ramp door and are parked on the rearmost section of the hold.

Although the Avenger's hold has a seating capacity for three gunners and five jump seat passengers, the entire lobby (depending on the owner's accessibility permissions) are able to stand in the hold.

The Avenger performs almost identically to most medium-sized planes or helicopters, able to reach a decent speed, but has a rather sluggish handling and climb rate. The large proprotors can make it difficult to land on narrow areas, as well as on uneven terrain, as it will easily lose control if one of the props touches an obstacle. It is incredibly stable in flight (doubly so with a maxed Flight stat), barely being disturbed by any form of turbulence.

It is not possible to land in "normal" mode, only VTOL. Attempting to land while the proprotors are forward-facing will trigger an automatic transition to VTOL just as the proprotor blades touch the ground with the wheels deployed. Transitioning between forward thrust and VTOL modes can cause altitude fluctuations and abrupt attitude changes with the nose pitching up or down, so it is best conducted only after the aircraft has gained a few hundred feet altitude or enough forward motion to counter the stall.

The Avenger is powered by two turboshaft engines, which produce a sound similar to the Cargobob when idle. If the aircraft tilts forward or changes into forward thrusting, its pitch will change, sounding similarly to medium-sized, turboprop aircraft such as the Tula.

The Autopilot feature allows the player to leave the helicopter cockpit while in mid-air and access the hold and even leave the aircraft. Players can man one of the cannons while the aircraft is in autopilot mode. Leaving the aircraft in mid-air can be done on foot to parachute or in a vehicle stored in the hold. Special vehicles that can fly are able to transition into flight mode after exiting the hold, while the Stromberg can transform into submarine mode and safely land in any body of water the Avenger is hovering over. The Avenger cannot easily be re-entered if left unmanned in autopilot, and must be returned to the facility to be used again.

Like the MOC, the Avenger has immensely durable armor and can withstand incredible damage. Terrain and inanimate object impacts are virtually ignored. However, the Avenger is not as resilient as the MOC, while it can take an immense amount of punishment before being destroyed, the fact of it being a plane reduces its effective durability. As with other planes, explosions can sometimes break off ailerons, which can result in the plane becoming virtually impossible to control, often leading to a crash. While the vehicle takes plenty of homing missiles to destroy the plane, it is very difficult to dodge without countermeasures, and getting hit in the wrong spot can permanently cripple the aircraft. Enough damage can also disable an engine, making the plane almost impossible to keep in the air. Crashing the plane after losing control usually will not destroy it, due to the durability of the hull, allowing the occupants to escape. The Chernobog is a major threat to the Avenger, due to its incredible range with its homing missiles, the speed at which they are fired, and their incredible accuracy. These missile trucks are best avoided, if one would wish to not have their Avenger shot down.

Like the Mobile Operations Center, the Avenger serves as a mobile transport for the player's personal Weaponized Vehicle, and it can be temporarily stored in the aircraft within the session (until the player switches session or leaves the game, which will simply reset the vehicle back to the garage where it was originally stored).

If the player has purchased the Gun Turret upgrades from the website and Facility workshop, up to three terminals are seen here, with the front one for the top turret, the left one for the nose turret and the rear one for the rear turret. This replaces some of the storage boxes scattered around the middle section of the cargo hold and adds additional seats for each gunner.

The optional Weapon Workshop gives the same functionality as the one from the Mobile Operations Center. It will be located near the vehicle storage area of the hold, next to where the rear turret terminal is located.

The Vehicle Workshop gives the same functionality as the one from the MOC. This adds various storage units within the walls of the vehicle storage area of the hold.

A CCTV monitor provides view of the aircraft's cockpit through a CCTV camera pointed over the pilot's right shoulder, which has limited horizontal movement. It is located around the middle section of the hold, next to where the left turret terminal is located.

A wardrobe can be seen near the secure door and is used in the same manner as any property-owned wardrobe. An "Armory" is also seen next to the secure door, which works the same as the Gun Locker from selected properties.

The Avenger is added to the player's Interaction Menu under the service section with the other vehicle properties such as the Galaxy Super Yacht and Mobile Operations Center. The vehicle is able to be called near* the player's location and dispatched back to facility storage on demand. The player cannot immediately relocate an existing Avenger using the menu; they must return it to the facility and then re-call it to their current location.

The base cost is $3,450,000 and for every non-default aspect selected, the price will be increased up to a maximum of $4,787,500. The player can modify the vehicle options at any time by re-visiting Warstock Cache & Carry and re-specifying the customization options, but will not receive any credit for previously purchased options.

Other modifications can be performed by the Weapon Mechanic inside the Facility at the Facility Vehicle Workshop.

When purchased, the Avenger comes painted in the following colors by default:

The Avenger on the updated Rockstar Games Social Club.

The Avenger in the cinematic preview on GTA Online Rockstar Games Social Club.

The Avenger with the "Sessanta Nove Multi-Color" Livery.

An Autopilot-controlled Avenger with the player on the ground having parachuted out.

Front section of the hold with doors to the cockpit, wardrobe and armory.

Mid and rear sections of the hold (stock form) with the turret controls on the right and the seating on the left.

CCTV camera terminal in the hold.

CCTV view of the cockpit.

Close-up of one of the Avenger's cannons.

Multi-turret control from the top turret. 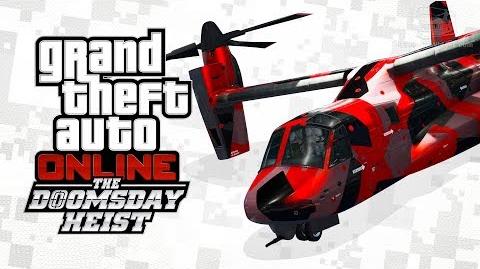 A static model variant exists that is only shown as the Avenger enters a facility. This model compacts the wingspan and folds the proprotor blades inwards to allow the aircraft to fit down the lift shaft. As this variant still uses the original Avenger data to allow it to represent the player's personal Avenger, it is still flyable with the use of modifications. 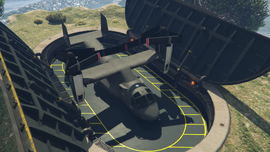 The AVENGER2 entering a Facility.