chopper_3
“Something deep within the American psyche cries out to do 100mph in a glorified lounge chair, and dammit if LCC aren't going to answer the call when they hear it. Don't get too comfy though, cos the engine sounds like it's gargling rocks and your left ankle is never more than a few inches from an open flybelt.”
— Southern San Andreas Super Autos description.

The Liberty City Cycles Avarus is a chopper featured in Grand Theft Auto Online as part of the Bikers update.

The vehicle takes the design of a mostly naked chopper, featuring a front mudguard attached to the fork legs, as well as chrome details on the sharp ends, on the forks and around the triple clamps. On the upper area, the lower clamp mounts a single headlight with a small covering above it, while the upper one mounts the handlebars with dual support frames. There are also sharp details on the upper caps of the forks and the ends of the handlebars.

The main body is relatively long, featuring a single main frame, a medium-sized fuel tank, a grey leather seat with white stitching and a square-shaped oil tank below it. The engine bay features a cone-shaped filter and two short, curved exhaust pipes on the right side of the engine, the latter coming from each cylinder block.

The rear section consist of a large fender with a sharp end, a rounded tail light on the left and a rectangle tail light on the right, with a vertically-mounted license plate below it. Like other motorcycles featured in the same update, the Avarus features a protruding primary drive with an Atomic-branded belt, as well as a chain drive, which are fully animated.

The primary color of the bike is applied on most of the bike's components, including the handlebar support frames, while the secondary color is applied on the main frame. The rims are of a unique design, consisting of four spokes with additional sharp tips on the center and grooved details on the centerline of the rim. Medium-profile tires are fitted as standard, with the rear one being wider.

The Avarus is a chopper with a lot of pedigree in terms of speed and its tight turning radius, proving itself to be a worthy competitor for usage in races. On off-road environments with uneven terrain, the bike sometimes loses traction and may end up losing control.

The Avarus uses a chain-driven, V-twin internal combustion engine with a 5-speed manual transmission, as evidenced by the foot-actuated gear shifter. While its engine sound is similar to the one used on the Hexer, the Daemon and the Hot Rod Blazer, it has a unique tone, also shared with its Halloween-themed variant, the Sanctus. 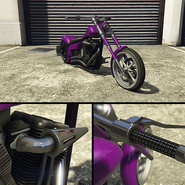 The Avarus on the Rockstar Games Social Club.

The Avarus on the updated Rockstar Games Social Club.

The Avarus in the cinematic preview on Rockstar Games Social Club.