"This is not a hypercar. It's not a sports prototype or a concept GT. It's something else. Something much, much better. And this isn't even an advert for whatever it is. The Autarch doesn't need an advert. It doesn't need anything it doesn't have already, least of all the approval of an irrelevance like you. No, you need it: more than you need money, dignity or life itself. Go on, we dare you not to buy it."
―Legendary Motorsport description.

The vehicle is heavily inspired by the Scuderia Cameron Glickenhaus SCG 003. The rear of the car is mostly based on the McLaren Senna, although with a lot of elements, such as the diffuser, taken from the KTM X-Bow GT4. Its roof and greenhouse also takes inspiration from the Koenigsegg One:1.

The Autarch features what appear to be butterfly doors, functioning similar to the T20 and GP1. However, the Autarch's doors do not rotate fully along the A pillar, giving them similar characteristics to the Infernus, behaving loosely akin to the design of scissor doors. 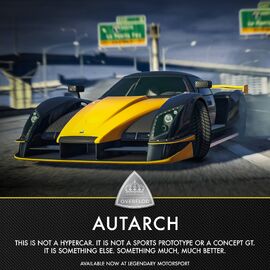 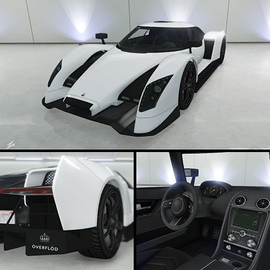 Retrieved from "https://gta.fandom.com/wiki/Autarch?oldid=1175815"
Community content is available under CC-BY-SA unless otherwise noted.