Prior to Grand Theft Auto V

Sniper scopes are a fixed feature for most Sniper Rifles for long range gunfights, complete with zoom functionality for spotting and attacking targets. The Equalizer from GTA Vice City Stories featured a scope as some form of attachment, though it had no purpose in the game.

Attachments serve as upgrades to alter the weapon's performance. They are available on the vast majority of firearms and can be bough on Ammu-Nation.

Attachments can greatly affect the performance of a gun, especially if used in combinations. For example, attaching a scope allows for a better weapon range, while attaching a suppressor allows for better stealth and less recoil, but lower accuracy. Attachments can vary depending on the gun type (e.g. shotguns will not receive scopes). Some guns cannot have attachments at all, or can only have extended magazines.

These weapons can be modified with pre-existing attachments and exclusive upgrades not available to standard weapons, being special ammo, muzzle upgrades and special scopes for specific ranges.

The Extended Clip increases the magazine capacity of the equipped weapon, making reloading less frequent. Ιt is especially helpful for fast-firing weapons as it prevents the weapon from burning through the mag ammunition quickly.

Percentage increase varies, going from 33% (some pistols) to 300% (Assault Shotgun)

The Flashlight is a small attachment mounted on the side or below the barrel that can illuminate areas. It only functions when aiming down the sights, and can be turned on/off. The Flashlight's power is limited but is sufficient enough to illuminate dark areas, making the attachment effective at night. A downside is that active flashlights can help other players spot the user more easily.

Something worth noting is that when a player looks directly at an active flashlight, it lights up the screen. This makes seeing the flashlight user harder at night.

The Scope is an optical attachment that replaces the equipped weapon's iron sights with a precision scope. In third person view, the scope only affects the zoom level while aiming the weapon, making engaging targets at long range easier. In first-person view, it replaces the iron sights with a red dot sight, which is effective if one does not like the weapon's sights, especially if they are obstructive.

The Advanced Scope is an attachment exclusive to the Sniper Rifle and Heavy Sniper. It increases the scope magnification and also changes the scope overlay. The attachment is helpful for long-range fights.

The Grip is an underbarrel attachment. The grip increases accuracy, which is especially useful at mid-range and long-range. This is also noticeable in first-person view as it decreases the viewkick caused by the weapon when firing.

The Suppressor is a barrel modification that silences the shots of the equipped weapon and also decreases muzzle flash. Suppressors are helpful for stealth purposes as they tend to make people more oblivious to gunfire than non-suppressed weapons. In some missions of Grand Theft Auto V, namely "Friends Reunited", "The Merryweather Heist",Monkey Business","The Construction Assassination" and "The Third Way", it is possible to use suppressed weapons to kill foes without alerting nearby NPCs (unless they see the body). In Grand Theft Auto Online, firing a suppressed weapon in Deathmatches does not make the player show up on the mini-map as they would by firing an non-suppressed weapon. However, as downsides, the damage per shot and maximum range of the equipped weapon are slightly decreased.

The Drum magazine is an attachment introduced in Grand Theft Auto Online with the GTA Online: Further Adventures in Finance and Felony update. It functions like the Extended Clip attachment, except that the ammo increase is significantly larger and lowers reload speed. In the case of the Carbine Rifle, the attachment is referred to as Box magazine, having the appearance of a light machine gun-style belt box.

Introduced in the Gunrunning update, Special Ammunition are upgrades that give special properties to firearms, which are:

With the exception of Tracer Rounds, special ammo generally have decreased rounds per magazine, with overall reserve ammo decreased for all of them. Explosive Ammo is even further decreased.

Mk II weapons have access to a variety of scopes, which work identical to the normal ones, but the zoom level varies on each version.

In addition to the Suppressors, Mk II weapons can be fitted with Muzzle Brakes (Compensators in the case of handguns), which reduce recoil during rapid fire, being useful for fast-firing weapons. Note that muzzle brakes only have cosmetic differences, meaning they offer the same effect.

The Heavy Barrel upgrade increases damage dealt to long-range targets, which falls to 50% of point blank damage instead of 30% for most weapons.

The upgrade can be applied to all weapons, with the exception of handguns and the Pump Shotgun Mk II.

Variant 4, used in the Pump Shotgun.

Variant 1, used in most pistols.

Variant 2, used in most two-handed weapons.

Alternate Variant 2, tilted on a side.

Unique version used in the Pistol Mk II, which is a cleaner version of the first model.

Flashlight variant 1 on the Pistol.

Flashlight variant 2on the Advanced Rifle.

Small Scope, which has a slightly taller mount than the Scope 1.

Medium Scope, which is a high-quality version of the Scope 2.

Large Scope, which is a black-tinted Scope 3.

Holographic Sight 3, used on most weapons featured in the Doomsday Heist weapons.

Scope 3 on the Combat MG.

Advanced Scope on the Heavy Sniper.

Brown/Tan grip used on most weapons.

Black variant of the grip used on the Mk II weapons. 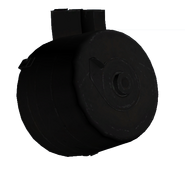 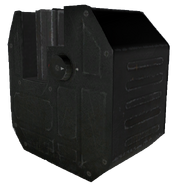 The Combat PDW's drum magazine with the Coil logo on it.

Extended clip on the Compact Rifle.

All attachments (including extended clip) on the Assault Rifle.

All attachments on the Assault Shotgun.