Goodyear
Michelin
Falken Tire
Atomic is a tire company featured in both the 3D Universe and HD Universe.

In GTA IV, they make all of the car tires in the game. The Patriot has Atomic branded headlights, including in Grand Theft Auto V before the After Hours update for the enhanced version. ﻿

Atomic serves the same purpose as it did in GTA IV but now they have their very own sponsorship blimp in the sky advertising their products. Pre-ordering GTA V granted access to the Atomic Blimp via a phone call to Atomic. There is an Atomic store on Little Bighorn Avenue and Macdonald Street in Rancho. It is one of the sponsors on the livery of the Jester and Massacro racecars. Atomic also manufacturers Serpentine belts which can be seen on some vehicle engines in Grand Theft Auto Online.

It is based on the real-world companies Goodyear and Michelin, manufacturers of tires for vehicles. Atomic also has a mascot made out of tires, a parody of the Michelin Man.

It could also be the Grand Theft Auto equivalent of Falken Tire because of the Atomic Drift livery for the Jester Classic which is based on the Falken Toyota Supra.

Atomic banner, seemingly based on the Michelin logo.

Garage banner with the Atomic logo. 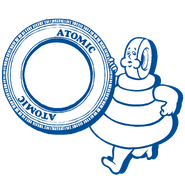 The old mascot of Atomic. 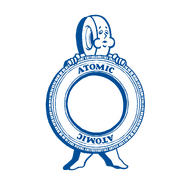 Atomic tires on the Sentinel in GTA V.