Ads for Athena 200's can be heard on the radio in GTA Vice City Stories (with the slogan "You're a goddess, smoke like one too".

The brand appears to be commonly mocked and it is mentioned on the Redwood Cigarettes website, stating that "no real man would smoke an Athena, even if he was drunk". Cousin Ed also makes fun of Lazlow in Grand Theft Auto: Vice City Stories stating that he probably smokes Athena 200's, once again criticizing him.

Athena 200's might be based on the real life Camel No. 9 100s Cigarettes and perhaps Gitanes for the woman figure on the packaging. 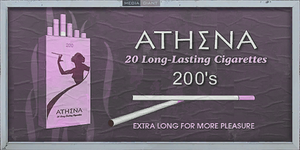 Billboard advertisement for Athena Cigarettes.
Add a photo to this gallery

Other tobacco companies and brands in the HD Universe of Grand Theft Auto.

Retrieved from "https://gta.fandom.com/wiki/Athena_200%27s?oldid=1168958"
Community content is available under CC-BY-SA unless otherwise noted.