Standard White - 100%
“So reliable, so much control. The Astron brings order to the chaos of Los Santos. Now when you hear the word "unstable" muttered by pedestrians, you can rest assured they're definitely not talking about the car.”
— Legendary Motorsport description.

The Pfister Astron is a luxury 5-door crossover SUV featured in Grand Theft Auto Online as part of The Contract update.

The Astron is mostly based on the Porsche Macan (95B).

The vehicle assumes a mostly rounded design and a tall profile, where the front end features a trapezium-shaped lower grille that spans about two-thirds of the car's width and has plastic sections around it. Slightly above the lower grille, there is the main grille, which bears four horizontal separations with a painted finish on the frontal surfaces and a plastic finish on the rest of them, followed by large side intakes bearing two horizontal separations and having the same features as the ones from the main grille. On the bonnet area, there are rounded housings on the edges that have a plastic finish and hold dual circular headlamps with curved strips beside each central unit, while the manufacturer logo is seen on the front and smooth lines running towards the base of the windscreen. This bonnet opens to reveal the plastic finish around the engine bay and the cut-out sections for the headlamps.

The sides of the vehicle are denoted by the flat shapes on the wheel arches and the flat side skirts, together with a plastic detail that runs through the doors and slightly angles upwards on the rearmost edges. The door handles are painted and the front doors mount a set of mirror shells near the cabin A-pillars, having a black/plastic finish on the lower portions, excluding the painted supports. The glasshouse area has plastic trims around the windows and platic inner pillars, together with a sunroof and a plastic roof spoiler fitted with a third brake lamp.

The rear of the vehicle is mostly predominated by a rear compartment door that bears the corresponding badges and a dedicated section for the number plate at the bottom, which opens to reveal a dual compartment on the interior. The middle area is occupied by a plastic section that spans the whole width of the vehicle and bears outer lamp strips that work as the main lamps, along with inner strips on the edges that are split between the upper reverse/turning lamps and the lower main/brake lamps. The bumper area features two red reflectors on the edges and a plastic section at the bottom that has seven small diffuser blades and rounded exhaust tubes.

The interior of the vehicle is shared from SUVs such as the Novak, the Rebla GTS and the Toros, using the same dial set from the FMJ and the aforementioned vehicles. The manufacturer logo can be also seen on the horn cap.

The primary colour of the vehicle is applied on the bodywork and the interior stitching, while the secondary one is applied on the details of the engine cover. It uses a set of 5-spoke split chrome rims with five bolts around the centre, wrapped with high-profile tyres. The accents around the same rims can support a dedicated colour, although only naturally-generated examples may have one.

Depending of the front bumper option installed, the Astron can have working secondary fog lights.

The Astron is powered by what appears to be a V-shaped engine, which is similar to the one found on the Novak and the Rebla GTS. It is coupled to a 7-speed gearbox in a front engine, all wheel drive layout (44-56, front to rear distribution), and shares the same sound as the Novak.

Pre-release screeshot of Dr. Dre in front of a red Astron. 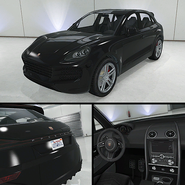 The Astron on Legendary Motorsport.

The Astron in the cinematic preview on Rockstar Games Social Club. 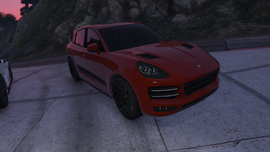 The Clinton Family's Astron parked in the driveway.(Rear quarter view)