“Promoted by Karin as an "attainable luxury vehicle", the Asterope is the perfect car for the middle manager who knows deep down he'll never be a senior executive but can't quite bring himself to admit it yet.”
— Southern San Andreas Super Autos description.

The car appears as the 'cousin' of the Sultan, as both have a similar build and are manufactured by Karin. The front end of the car features typical Japanese geometric formations, with the dominant feature being a sharp curve separating the bumper area from the upper area. The bumper area has a slatted, trapezium-shaped duct occupying a third of the car's width, with a license plate mounted centrally over it. On either side of the main duct there are smaller, inset quadrilateral ducts, which house circular fog-lamps. On the upper area, the grille is a large chrome-edged trapezium with curved edges and horizontal chrome strips, while the headlamp units are similar in height to the grille and house two clear circular lamps closer to the grille and a small amber turn indicator lamp further away. The headlamp unit's outline feature a small bump in the lower edge, contoured to the larger clear lamp. The manufacturer emblem is placed centrally just above the grille. The car's hood/bonnet lacks any formations.

The sides of the car are fairly simple, with the wheel arches featuring light flaring. At about a fifth of the car's height there are chrome horizontal trim strips, while the door handles are also trimmed with chrome. The greenhouse area features windows with polymer-covered B pillars, polymer-covered rear window separations and long, fairly smooth C pillars, while the roof is entirely curved and features a sunroof over the front row of seat. An antenna is mounted centrally just in front of the rear windscreen.

At the rear, the rear Altezza lamp units are chrome-backed apart from an amber strip at their base. In between these, there is an equally-tall, impressed license plate area, with an horizontal chrome strip at its top and side edges parallel to the nearest rear lamp unit. There are silver badging displaying its name and manufacturer, almost above the tail lamps. The rear bumper is slightly elevated and is flat, at its base there are two small circular exhaust tips, one towards either edge of the bumper.

The interior of the car is the same one from cars like the Schafter and the Tailgater, sharing the same dial set, dashboard details and interior extras. It is seen in a variety of single colours for the body and the stitches of the interior, and uses seven-spoke wheels wrapped in medium-profile tires, also shared with the Stratum.

The Asterope is a rather well-performing car in comparison to most other vehicles in its class. Its top speed is surprisingly high, and can hold its own against more expensive, luxurious cars such as the Zion and Jackal. Acceleration and conversely braking are both comparable to other sedans. Despite its soft suspension, handling is quite respectable for a vehicle of this size. However, said suspension may cause excess body roll, making the vehicle unstable at high speeds and potentially leading to some oversteer. Durability is decent, as the car can take several strong head-on crashes before the engine fails.

The Asterope is claimed by the badges to utilize a 3.5L V6 powering the front wheels, yet in-game, it utilizes a turbocharged, twin-cam 4-cylinder engine powering the rear wheels, through a 5-speed gearbox. Its engine sound is mid to high revving, shared with cars like the Premier and the Romero Hearse. 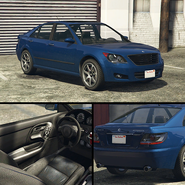 The Asterope on the updated Rockstar Games Social Club.

The Asterope in the cinematic preview on Rockstar Games Social Club.

The special variant of the Asterope in Cleaning out the Bureau.