In-game time
“Steal one or more vehicles from a Police Station and deliver them to the drop-off location.”
— Work description.

Asset Recovery is CEO/VIP Work featured in Grand Theft Auto Online, added as part of the Executives and Other Criminals update.

“Asset Recovery sends your organization to LSPD stations around the city to recover impounded vehicles. It’s up to your outfit to free up those assets and return them to a designated location, while the cops and other players in the session will be looking to destroy your vehicles.”
— Rockstar Newswire description

Once the player selects one, the mission starts and SecuroServ sends the organisation members a message instructing them to steal vehicles from the selected location. All four Los Santos starting locations have cars as target vehicles, while the two Blaine County locations have either motorbikes or quad bikes.

If playing solo, only one target vehicle will spawn. If the vehicles are motorbikes, one will spawn for every organisation member, so a maximum number of four. With cars, only one additional will spawn, regardless if there are two, three, or four members.

At the La Mesa Police Station, the target vehicle is a Pfister Comet, with an additional Bravado Banshee spawning further inside the impoundment lot if not playing solo. At the Mission Row Police Station, a Vapid Dominator is parked around the back of the station, behind an electronic gate, with the second vehicle being a Bravado Gauntlet parked near the entrance to the station. In Vespucci, a Lampadati Pigalle spawns in the car park, with a second car, a Declasse Rhapsody, parked in a more enclosed parking space further up from the car park. In Vinewood, a Benefactor Stirling GT spawns in a small garage at the back, while an Invetero Coquette BlackFin spawns at the small car park near the entrance to the station when playing with more members.

At both locations in the countryside, the number of vehicles matches the number of organisation members. Nagasaki Blazers spawn in Sandy Shores and Principe Lectros in Paleto Bay.

The vehicles are indestructible until one of them is stolen. After a player takes the vehicle, they will receive either a three- or four-star wanted level; three stars for motorbikes/quads and four for cars. All players in the session are also notified once the boss takes the vehicle so that anyone can take the opportunity to steal the vehicle and deliver it themselves.

When the player nears the drop-off area within a 2km radius, they are told they are nearing the location and they are reduced to a two-star wanted level, which needs to be evaded before delivering the vehicle. If the starting location is in Los Santos, the drop-off location will be one of three areas in the countryside; the Sonar Collections Dock, Procopio Truck Stop, or the Foreclosed North Alamo Pier. For the two countryside police stations, the drop-off is either a warehouse in LSIA or on Elysian Island.

A warehouse in LSIA.

A warehouse on Elysian Island. 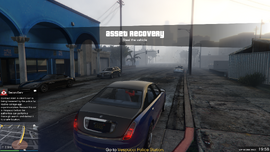 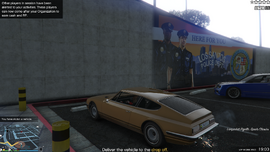 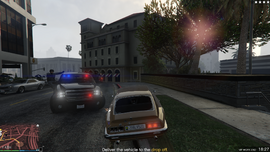 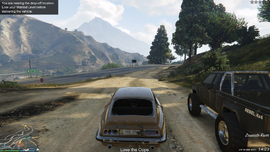 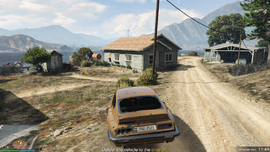 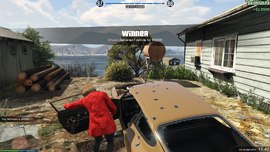