GTA Wiki
Register
Don't have an account?
Sign In
Advertisement
in: Pages with non-numeric formatnum arguments, Weapons, Weapons in The Lost and Damned,
and 8 more
English

U.S.A. (according to Johnny in TLAD)

The Assault Shotgun is modeled after the Penn Arms Striker-12, an American copy of the Armsel Striker.

The Assault Shotgun differs from the other shotguns in having a cylindrical magazine where the shells are loaded and a grip on the front, as well as a folded stock. The Assault Shotguns has markings on the sides that read "Liberty City Armory".

The Assault Shotgun returns with a new design, based on the Turkish shotgun UTAS UTS-15. However, the Assault Shotgun does not have a Pump Action (although the pump handle is visible) nor is it in a bullpup configuration like the UTAS UTS-15 and instead performs more akin to the TLAD version (full-auto), with visual and mechanical traits from TBoGT's Automatic Shotgun. Additionally, the Assault Shotgun has small Picatinny rails on the sides of the handguard. The weapon is fitted with a box magazine (as opposed to the real UTS-15's internal magazine, with the available magazine sizes based on the smallest and largest sizes available for the MPS AA-12, at 8 and 32 shells respectively. The muzzle is tipped with a slotted flash suppressor. The top picatinny rail has two iron sights placed, one at either end. The pistol grip is a relatively old design, lacking the notch found on newer lower receivers.

“This fully automatic shotgun is extremely powerful and fires off shells constantly. This weapon is very effective at taking out multiple targets at once and can take down vehicles quickly.”
— The Lost and Damned website description.

The Assault Shotgun boasts high firepower, allowing it to deal with crowds of enemies, vehicles and even low flying helicopters with ease. It is extremely effective in short range, but its usefulness diminishes over distance. It holds eight shells in each drum, and the player can hold a total of 250 shells. Due to its extreme power, it is easily capable of setting almost any vehicle on fire in around a full drum. Lighter street cars do not stand a chance against the Assault Shotgun, and are set on fire almost instantly. Heavier police trucks and pickup trucks can take a little more damage, but they too are destroyed extremely fast.

It is distinguished from other shotguns of its class due to its fully automatic capabilities, and its reload speed is fast, comparable to the Assault Rifle and Carbine Rifle.

The Assault Shotgun possesses relatively high damage per pellet for a shotgun (higher than that of the Pump Shotgun), dealing 32 damage per pellet. The amount of pellets per shot is 6, unlike the usual 8, allowing the player to deal a full 192 damage, assuming all pellets hit the target. This damage profile makes the Assault Shotgun powerful in close-quarters. Like most shotguns, the pellet spread is large, meaning the damage dealt to an enemy at mid-range is likely to be low, due to fewer pellets hitting the target and damage drop off (starting at 5 meters).

The Assault Shotgun's unique property is the fully-automatic firing mode. This, combined with the high damage, makes the Assault Shotgun very effective in terms of damage-per-shot, and gives the weapon more efficiency at mid-range and in blindfire as the player can quickly fire follow-up shots, allowing them to score a higher amount of hits. The fire rate is an average 240 rounds per minute, which is higher than that of handguns (minus the AP Pistol), but not extraordinary either.

The Assault Shotgun initially has a heavy drawback of poor magazine capacity. Each magazine by default holds eight rounds. This, combined with the full-auto fire mode, makes frequent reloading common in combat. Equipping Extended Clip counters the drawback of low magazine capacity. The reload time is nearly two seconds, which is quite short compared to other shotguns.

The Assault Shotgun benefits from the usual attachments selection. The Grip is an helpful attachment to maintain high accuracy, which renders the weapon more effective at medium range. Extended Clip gives a large bonus to the magazine capacity, by increasing the capacity by a notable 300%, allowing each mag to hold 32 rounds. This high magazine capacity is very helpful as it allows the player to fire a high amount of shots before reloading. The Suppressor allows the player to fire suppressed shots, in exchange of lower pellet damage and range. Due to the Assault Shotgun's relatively poor effectiveness at medium range, it is recommendable not to use a suppressor, to avoid reducing the chances of one-hit kill at medium-to-close range. The Flashlight is also available which helps the player to engage targets in dark areas or during nighttime.

In conclusion, the Assault Shotgun is a strong CQB weapon, and like the AP Pistol, It is able to easily outclass other weapons of its class.

Johnny Klebitz destroying a Police Patrol with an Assault Shotgun.

An encounter in multiplayer involving an Assault Shotgun.

A gunfight in multiplayer, again involving an Assault Shotgun.

Franklin Clinton with his Assault Shotgun. 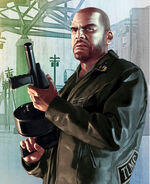