GTA Wiki
Register
Don't have an account?
Sign In
Advertisement
in: Weapons, Weapons in The Ballad of Gay Tony, Weapons in GTA V,
and 9 more
English

“A high-capacity submachine gun that is both compact and lightweight. Holds up to 30 bullets in one magazine.”
— Grand Theft Auto V description on Ammu-Nation and Social Club.

The Assault SMG is a Submachine Gun in The Ballad of Gay Tony , Grand Theft Auto V and Grand Theft Auto Online, the latter two as a Rockstar Social Club bonus weapon and manufactured by Vom Feuer.

“Light, compact and accurate, this machine gun is perfect for urban combat.”
— Description from the TBoGT website

The Assault SMG is modeled after the FN P90, and it is classified as a personal defense weapon. It features a cartridge size somewhere between a pistol round and an assault rifle round and is outfitted with a suppressor, which reduces the recoil, noise and muzzle flash. The Assault SMG is one of the first bullpup weapons offered in the Grand Theft Auto series. It is perfect for heated gunfights and easy to carry due to its light and compact size.

NOOSE Tactical Response Unit and the FIB use this weapon against the player in addition to the SMG and the Carbine Rifle.

“Automatically unlocked for all Social Club members in Grand Theft Auto V Story Mode, the Assault SMG is a high-capacity submachine gun that is both compact and lightweight. This powerful weapon holds up to 60 rounds in one magazine. The gun can be picked up from your local Ammu-Nation.”
— Rockstar Games description.

In Grand Theft Auto V, the weapon appears to be based on a Magpul PDR without the extra ergonomic handgrip at the front. The top picatinny rail is relatively short (in comparison with the PDR), because the model features an integrated carry handle. The main grip is somewhat similar to that of an Arctic Warfare.

The Assault SMG now employs a standard 30-round magazine and does not have a suppressor by default (though due to the attachments feature, it can be upgraded with one).

Compared to the SMG, the Assault SMG is just as accurate, but with reduced recoil, slightly more damage per shot, and a 50-round magazine that Luis finishes the reloading animation by briefly looking down the sights of the P90, adding .6 more seconds to the reloading process than an SMG. If hiding behind low cover, like a car, Luis and the multiplayer player will take longer reloading the Assault SMG' (5 seconds).

Unlike other SMGs, the Assault SMG cannot be used by the driver of a vehicle, as it is deemed too large.

The Assault SMG is roughly similar to the Micro SMG and SMG in terms of range and accuracy. However, the Assault SMG deals a slightly more damage than these two, allowing to take out targets slightly faster. It appears to be slightly slower that the aforementioned SMGs in terms of fire rate, having only 460 rounds per minute.

Overall, the Assault SMG is a good starting weapon, as it can carry more rounds than the Micro SMG, but is unable to be used for drive-bys.

One hidden feature of the weapon is that its damage is not decreased with distance - an effect shared only with the Pistol .50, Marksman Pistol and Sniper Rifles. Despite being outclassed in term of firepower by most Assault Rifles and machine guns at close-to-medium range, it becomes more powerful near its maximum range (roughly 120m like most weapons) as a result, since other weapons fall at 30% firepower. This makes it an efficient weapon to shoot at helicopter's tail rotors.

Franklin Clinton with his Assault SMG. 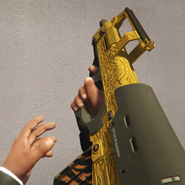 The Assault SMG at Ammu-Nation.