asea
asea2
“An affordable, no frills, fuel-efficient compact sedan. When 'ample headroom' is central to the marketing campaign, what you see is what you get.”
— Southern San Andreas Super Autos description.

The Asea features a tall, narrow body that is significantly inspired from the first generation Chevrolet Aveo sedan (also known as the Holden Barina in Australia, Chevrolet Lova in Asia, and Daewoo Gentra in South Korea), as well as the Suzuki Aerio/Liana, with frontal influences from both Dacia Logan facelift and Dacia/Renault Logan 2013 and the rear from the first generation Dacia Logan with a high rear decklid. Its rear is similar to a 2004 Chevrolet Malibu, with the tail lights resembling the 1999 VW Bora/Jetta. The overall shape and rear of the Asea bears some resemblance to a 2000-2002 Toyota Platz/Echo.

In terms of main aesthetics, the Asea is a relatively basic sedan with a rather wide and tall body, where the front bumper features three meshed intakes roughly occupying three quarters of the car's width, followed by protruding lower quarters and a license plate above the central intake. On the upper area, there is a large meshed grille bearing the Declasse badge in the center, along with plastic inset housings beside the grille, each one having a large circular light on the inner side and two smaller ones on the outer side. The small hood bulges upwards lightly, and increases in height as it gets to the windshield.

The sides of the car has character lines mainly on the front doors, with the wheel wells and the skirting area bulging slightly to the outside, while the other character line spans the entire length of the car, until it gets to the rear effortlessly. The greenhouse area is traditional in design and has plastic trimmings around the windows, on the inner pillars and beside the roof panel, as well as body-colored mirror wings placed on the front.

The rear section is mainly dominated by the trunk bearing the corresponding Declasse badges and silver lettering displaying its name, with a characteristic ridged formation on the lower side. Each side of the car has the corresponding tail lights with plastic fittings around them, with large brake lights, upper marker lights and lower reverse/turning lights. The bumper has a slanted profile at the bottom side and holds a license plate on the center, situated under the trunk lid. A small exhaust pipe can be seen on the driver side, under the bumper. The Asea uses Presidente light textures.

The interior of the car is shared with vehicles like the Schafter and the Tailgater, but on closer inspection of the interior, the player can see a digital clock near the windshield.

The car is only painted with a single color, which also affects the interior stitching. It uses a set of split five-spoke rims also shared with the Minivan, the Stanier and the FQ 2.

The Asea appears to have a lot more brake-horsepower than its larger counterpart, the Premier. It is powered by a V8-cover engine, coupled to what sounds to be a 5-speed manual gearbox. Being a front wheel drive vehicle, it has incredible capabilities to make maneuvers such as J-Turns and U-Turns, which a normal RWD vehicle would potentially struggle at. The power from the vehicle can be seen majorly when setting off quickly, a notable amount of wheel-spin will reveal the car's power, but also shows the car's traction is minimal, compared to the Premier. Deformation is rather average for a car of its size; the car tends to show slight deformation after 3 - 5 frontal crashes, though the crumple zones of the vehicle don't pose a threat to the vehicle's handling or turning line, seen as the crumple zones appear around the front/rear bumpers and greenhouse area.

Overall, the car is a good pick for an average sedan, given its high power output, superb handling and average capabilities, however the car proves to fall on traction and braking, mostly because of the front-wheel drivetrain. 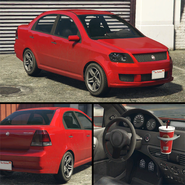 The Asea on the updated Rockstar Games Social Club.

The Asea in the cinematic preview on Rockstar Games Social Club.

A snow variant of the Asea (named as Asea2 in the game's internal files) appears in the game for the purpose of appearing in the mission Bury the Hatchet (when playing as Michael). This variant is almost identical to the normal one, but heavily covered in snow and bearing North Yankton plates. This variant is also fitted with tire chains to improve control over snowy surfaces (even though it is only an aesthetic feature), and replaces the default split five-spoke rims with full steel rims somewhat similar to the ones used on the Police Cruiser. 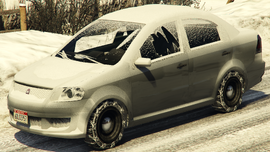 A snow covered variant of the Asea in GTA V. (Rear quarter view)

The snow variant of the Asea on the Rockstar Games Social Club. 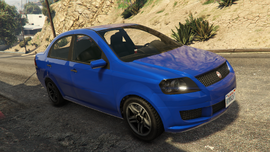 The Asea is one of the rarest vehicles in the original version of Grand Theft Auto V, but appears on the streets in the enhanced version.