GTA Wiki
Register
Don't have an account?
Sign In
Advertisement
in: Characters, Characters in The Ballad of Gay Tony, Random characters
English

Simon Jutras
“I hate to tell you my friend, nothing matters in this world apart from getting your rocks off, or getting so out of it so you don't realize you haven't got your rocks off.”
— Arnaud to Luis Lopez during their first encounter.

Arnaud is a character in the Grand Theft Auto series who appears as a minor character in The Ballad of Gay Tony.

Arnoud is a middle aged French man, who's arrived to Liberty City for a sex and drugs filled holiday in 2008. He used to have a family, but over time found them meaningless, seeing the world in a nihilistic and hedonistic way, where all that matters is getting laid and getting high.

He was described by Dan Houser as "this French kind of modern-day version of a flâneur who just knew how to exist".

When Arnaud and Luis Lopez first met, the two got along and after some conversation about France, America, and television near Star Junction. He asks Luis to take him to a massage spa for an appointment, which he agrees to.

The second time they met, Luis found Arnaud deep in Bohan after a night of Chinese opium laden bondage with some Brazilian prostitutes and was left on a street corner, beaten up, with his wallet stolen. Claiming that the wallet had sentimental value, Luis agrees to chase the pimp, kill him, and return Arnaud's wallet. After returning the wallet, Luis drops Arnaud off in a relatively safer part of town. 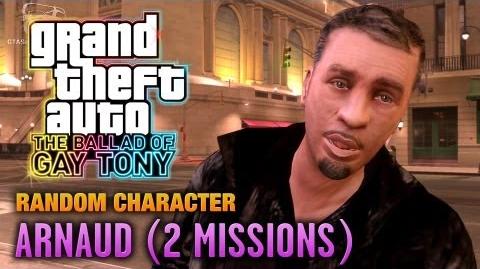