The Army Trailer[1] is a towable trailer in Grand Theft Auto V.

The name of the trailer is shared with the flatbed army trailers seen during missions, however this trailer is based upon the Tanker-based trailer. It shares the model with the regular tanker, but features a camo paint-job matching the military vehicles in the game. It appears with a twin axle design. 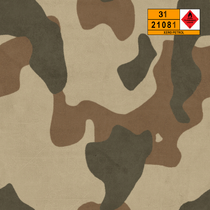 The trailer shares its handling properties with the tanker-based trailer. Contrary to popular belief, the explosion caused by this vehicle is not any different from the regular tanker, as they share properties. The player can also stand on top of a moving Army Tanker without the risk of falling off.[2]

Although the vehicle cannot be driven, it does feature its handling line shared with the tanker. 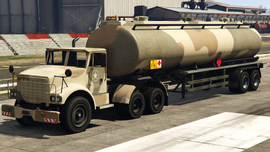 Retrieved from "https://gta.fandom.com/wiki/Army_Trailer_(tanker)?oldid=1216592"
Community content is available under CC-BY-SA unless otherwise noted.