Police/Government Plate - 100% (armytrailer only)
The Army Trailer[1] is a towable trailer in Grand Theft Auto V.

The trailer can be seen in three different versions:

The freight trailer cannot be towed by any vehicles, as it is not listed under any trailer property of trucks. If the player gains a freight trailer, driving a truck up to the trailer in attempt to hook it on will result in the stands failing to raise, and the fifth wheel will not hook accept the trailer.

Being a heavy-duty trailer and build primarily for larger, heavier loads, it is easily the heaviest trailer a tractor trailer can tow, being as heavy as a Barracks Semi. Because of this, player will find it quite difficult to cruise around busy traffic or narrow streets, as well as a significant reduction in speed. The trailers' widths also mean they are extremely precarious to effectively tipple upon cornering, and the front extension of the trailer often results in a poor turning radius. The extended version is much exigent, requiring more space to turn the vehicle without crashing it on other cars or other obstacles on the streets. The player can also stand on top of any variation of the trailer without the risk of falling off.[2] 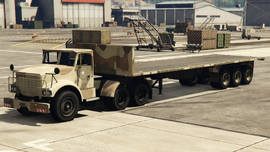 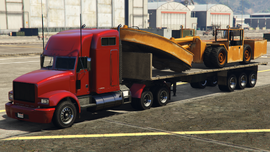