GTA Wiki
Register
Don't have an account?
Sign In
Advertisement
in: Missions, Missions in GTA V, Side Missions, Hobbies and Pastimes

Variable amound of money and a weapon.

Arms Trafficking Ground are a series of side missions featured in Grand Theft Auto V.

After completing the mission Nervous Ron, The McKenzie Field Hangar becomes available for purchase for a price of $150,000, only while playing as Trevor. Upon purchase, Trevor gains access to the fields hangar, and the Dune Buggy off-road vehicle that is outside. When Trevor enters the vehicle, he will receive instructions over radio from Oscar Guzman on what needs to be done.

Arms Trafficking Ground missions involve Trevor going to different locations to pick shipments delivered by plane to Oscar, before enemy gangs reach the location and pick the cargo for themselves. There are a total of five ground trafficking missions to undertake. In order to unlock the next one, you must first unlock the one before it. Each ground trafficking mission earns Trevor $5,000 and a weapon, the weapon varies depending of the mission.

Each of the five missions count towards one out of fifty-nine Hobbies and Pastimes missions, but they do not count towards the 100% game completion checklist.

In the first mission Trevor needs to go near a mobile home on East Joshua Road to pick an arms package before the Rednecks reach the place. He also needs to avoid main roads to not draw the attention of the police. In this first mission, unless the player takes way too much time to reach the drop zone, it's very difficult to not pick the package before the Rednecks show up. Once the package is collected, go back to McKenzie Field Hangar to finish the mission.

In the second mission Trevor needs to go to the pier in Galilee to pick the arms package before the Marabunta Grande reach the place. One group of members of the Marabunta Grande will appear in the middle of the way to the pier. It's not difficult to reach the drop zone before then as long as the player drives fast, however, it will be necessary to lose their attention after the package is picked up. Once the player lose the Marabunta members attention, just go back to McKenzie Field Hangar to finish the mission.

In the third mission Trevor needs to go to an old farm house in the San Chianski Mountains to pick up the arms package before the Aztecas reach the place. There will be two groups of Aztecas looking for the package. Reaching the drop zone before them is not difficult but losing their attention after getting the package is. Try to stop the Dune Buggy and wait for them to get out of their vehicles to shoot Trevor. Once they're out of their vehicles, drive as fast as you can away from them. They will lose a lot of time to go back to their cars and the player will be able to go far enough to lose their attention. Go back to McKenzie Field Hangar to finish the mission.

"The continued rise in illegal arms trafficking through the Senora Desert has government officials worried. Weapons are now going in and out of the region by air, road, rail and sea, feeding the kind of vibrant market and sophisticated distribution network that we would happily turn a blind eye to if it were only operated by US criminals rather than cartel-funded terrorists."

In the fourth mission Trevor needs to go to an old rail station in San Chianski Mountain Range, once again before the Marabunta Grande reach the place. The Marabunta members will be really close to the drop zone this time, so the player will need to hurry to reach the location before them. Once the arms package is picked up it will be necessary to lose their attention one more time, using the same strategy described above if necessary. Go back to McKenzie Field Hangar to finish the mission.

In the last mission, Trevor needs to go near the Senora National Park, once again before some Rednecks reach the drop zone. Despite being the last mission, it's possible to outrun them and reach the drop zone easily before the Rednecks appear. However, a group of them will appear in a helicopter while the player is going back to the McKenzie Hangar. It's recommended to get out of the Buggy and down the helicopter, rather than shooting inside the Buggy. Once the helicopter is no longer a threat, go back to McKenzie Field Hangar to finish the mission. 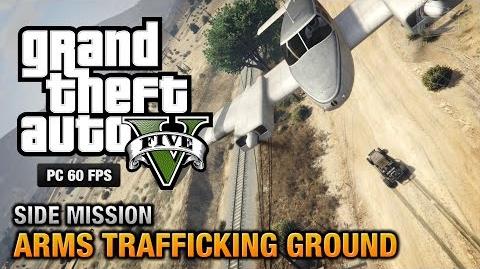