GTA Wiki
Register
Don't have an account?
Sign In
Advertisement
in: Missions, Missions in GTA V, Side Missions, Hobbies and Pastimes

Wasted
Busted
Plane gets destroyed.
Player abandons the plane.
Player run out of bombs.
Packages not delivered on time.
Caught flying over Fort Zancudo and getting shot down.

In-game time
“Okay, radar's working, you're up on the screen here. We got two deliveries. I've put in the coordinates. You make the drops, you get out of there. Easy!”

Arms Trafficking Air are a series of side missions featured in Grand Theft Auto V.

After completing the mission Nervous Ron, The McKenzie Field Hangar becomes available for purchase for a price of $150,000, only while playing as Trevor. Upon purchase, Trevor gains access to the fields hangar, and the Cuban 800 airplane spawns inside. When Trevor enters the airplane, he will immediately receive instructions over the radio from Oscar Guzman on what needs to be done.

Arms Trafficking Air missions involve Trevor dropping weapons packages into designated drop zones, and bombing competing arms runners. There are a total of five air trafficking missions to undertake. After the first mission is completed, a second one is unlocked after a certain time, and repeats until the fifth one. Each air trafficking mission earns Trevor $7,000, plus 1-3 bonus of $125 assigned for each mission.

Each of the five missions counts towards one out of fifty-nine Hobbies and Pastimes missions, but they do not count towards the 100% game completion checklist.

In the first mission Trevor needs to drop two packages in two different zones on the map, one of the drop zones will be in Great Chaparral, near the Route 68; the other drop zone will be in the Altruist Camp in the Chiliad Mountain State Wilderness. After both of the packages are delivered, Trevor needs to go back to the McKenzie Field Hangar and land the plane in the hangar. The packages can be delivered in any order and Trevor will have a total of four packages in the plane, meaning that he can miss two packages before the mission fails.

In the second mission Trevor needs to drop three packages in three different zones, one of the drop zones will be at the east part of the Mount Josiah; another one will be at a farm in Grand Senora Desert; and the third one will be near the Land Act Reservoir in the Tataviam Mountains. After all the packages are delivered, Trevor needs to go back to McKenzie Field Hangar and land the plane at the hangar. This time it's also important that Trevor flies low to not be detected by the radar of the cops. Once again the packages can be delivered in any order and there will be four packages in total on the plane, which means that Trevor can only miss once.

In the third mission Trevor will need to destroy four groups of Aztecas using bombs dropped from the plane, one of the groups will be near a pier in the Alamo Sea; another group will be near the Great Ocean Highway, in the Chiliad Mountain State Wilderness (in the exact same place where the Deal Gone Wrong random event is triggered); the third group will be northeast of Paleto Bay; and the fourth group will be in a pier in the San Chianski Mountain Range (where the mission Monkey Business begins). Once again, take the plane to McKenzie Field Hangar and land at the hangar once all the groups are destroyed. The groups can be destroyed in any order and Trevor will have a total of six bombs to destroy all four of then, so he can only miss two times.

"The continued rise in illegal arms trafficking through the Senora Desert has government officials worried. Weapons are now going in and out of the region by air, road, rail and sea, feeding the kind of vibrant market and sophisticated distribution network that we would happily turn a blind eye to if it were only operated by US criminals rather than cartel-funded terrorists."

In the fourth mission, Trevor will need to destroy two enemy cargoes from the Marabunta Grande that are being moved across the estate. One of the cargoes is being moved by train, once the mission starts he will be near Sandy Shores; the other cargo is being moved by boat and will be in the ocean near Raton Canyon. Take the plane back to McKenzie Field Hangar and land at the hangar once both of the cargoes are destroyed. The two targets can be destroyed in any order and Trevor will have four bombs to destroy them both, which means that he can miss two times.

In the last mission, Trevor will need to destroy three sets of vehicles being used by the Rednecks in the Sandy Shores Airfield, that they took as a base of operations. There will be two sets of planes and one of trucks, this time when Trevor drops a bomb, instead of a single bomb he will drop a chain, so it's important that the plane is aligned with the sets of vehicles so he does not waste any bombs. Once all three sets are destroyed, take the plane back to McKenzie Field Hangar and land at the hangar. The sets can be destroyed in any order and Trevor will have four chains of bombs to destroy all the sets, meaning that he can only miss once. 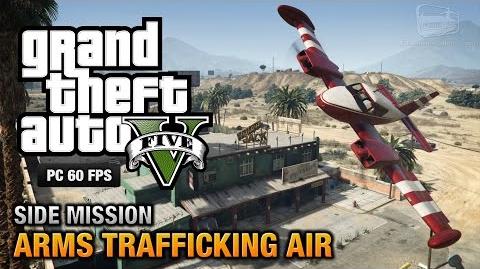