Lester, at rank 19 will call the player to explain that Armored Trucks are good targets for the player to make cash but to watch out as the LSPD don't take kindly to that sort of thing. Stockade Armored Trucks will then appear randomly in Free Mode sessions, alternating with Kill Targets, Crate Drops and Simeon's High Priority Vehicles (if the player has unlocked these).

The Stockades will spawn in random locations on the map (near to the host player only) with a specific icon on the radar, normally within a block of a player.

All players in the lobby will be alerted with a message

Armored Trucks are shown on the Radar by

. They carry cash which can be stolen.

The player needs to open the back of the Stockade to gain access to the cash. This can be done by either:

Any attack on an Armored Truck including vehicular impact or a single bullet will result in the Gruppe Sechs driver attempting to escape by driving off at speed and an immediate 3 star Wanted Level being applied to the attacking player. All players in the lobby will get a message:

[Playername] has attacked an Armored Truck

Blowing the doors open with a Sticky Bomb while the van is stopped may result in the passenger side NPC exiting and attempting to shoot at the player. Once the doors are open the player will receive a message:

Cash has dropped from the Armored Truck.

A number of cash bags (2-6) will drop from the back of the truck and the player needs to be on foot to collect these.

The player then needs to lose their wanted level, although failing to escape will not forfeit the cash picked up, only incurring their normal medical bill.

Blowing the truck up will forfeit any cash. This will happen if a Sticky Bomb is used to open the door when there is another vehicle (player Personal Vehicle or NPC traffic) close enough to be exploded by the detonation.

If no player attacks the spawned truck it will eventually de-spawn from the radar/map and even though the truck itself may still be visible to a player, it will be deactivated and will not produce any cash if attacked.

Upon release of the Xbox One, PlayStation 4 and PC versions of the game, the mission was carried over and still occurred.

The event was removed in the Freemode Events Update (patch 1.29), to make room for Freemode Events added exclusively for those platforms. The mission remains available for original version platforms (Xbox 360 and PlayStation 3).

As of the Southern San Andreas Super Sport Series update (patch 1.43), the event appears in the Interaction Menu under "Options", where Armored Trucks, as well as Crate Drops, are listed among the other Freemode Events update. Enabling them, however, does not do anything, as the script is no longer present in the game. As of the After Hours update, these no longer show up under Hide Options in the Interaction Menu; however, Armored Trucks and other removed features still show up as locked in the Content Menu under Stats. 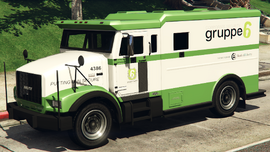 A Stockade which appears during the mission. 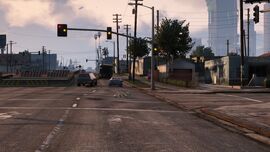 Retrieved from "https://gta.fandom.com/wiki/Armored_Trucks?oldid=1308437"
Community content is available under CC-BY-SA unless otherwise noted.