boxville5
“Does it count as post-apocalyptic if the GoPostal guy left it in a parking lot in Sandy Shores overnight? We're not sure, but once it had been reclaimed from the gun-toting, diesel-swigging mutants who'd turned it into their personal war buggy, the Brute was born. Now their degenerate genius is hitting the open market, so if you want to look, smell and feel like the end of the world, this is your chance.”
— Warstock Cache & Carry description.

The Brute Armored Boxville is a vehicle featured in Grand Theft Auto Online as part of the Import/Export update.

The vehicle is an armed and armored variant of the Boxville, featuring a unique armory that mainly consisting of metal bars and criss-cross panels around the body, grilled protection on the windows and lights, and a small wedge on the front acting similarly to the Phantom Wedge's front nose cone. There are also barbed wire, various accessories and two high-beam lights on top, as well as a dedicated section for the turret. Its interior is largely identical to the regular Boxville, but there are stacked crates that serve as an improvised platform for the turret gunner.

The vehicle is only available in a black color, which is barely noticeable due to the worn texture/livery around (though it can be resprayed with the corresponding settings in Content Creator, revealing the underlying color). It also uses a set of industrial wheels that are mostly covered by metal plates/discs.

The vehicle is equipped with a machine gun turret that resembles a Browning M2HB .50 caliber machine gun.

As expected, the vehicle is significantly slow due to the large amount of armor across the entire vehicle, meaning its compact engine struggles to power the rear wheels under this load. The front-fitted ram gives the vehicle superior ramming capabilities, capable of barreling through oncoming traffic with little loss of speed.

The Armored Boxville currently does not have an engine model on it, since its hood is completely protected by the external framing, making it impossible to open. Even by managing to see through the engine bay, there is no current engine model. Unlike other versions of the Boxville, the engine sound is shared with the Dune.

Unfortunately, despite being an armored vehicle, its level of protection against damage is rather low. It has no added resistance to explosions as compared to regular vehicles, and cannot survive one hit from an RPG, grenade, or other explosives, meaning that the armor is only for aesthetics. Its windows are somewhat bullet-resistant, but, similar to the windows on vehicles such as the Rumpo Custom, will shatter and leave the vehicle's occupants vulnerable after only a dozen or so bullets. In addition, the tires on the vehicle are not bulletproof despite having protective rims, and since the vehicle cannot be modified at Los Santos Customs, this weakness cannot be removed.

Machine Gun: The vehicle comes equipped with a .50 caliber machine gun turret similar to the Insurgent Pick-Up, which has devastating power against pedestrians and unarmored vehicles, able to kill most NPCs and players in one to two hits and take down most helicopters or vehicles in less than twenty. Care should be taken that the gunner has low protection on it (only partial protection on the rear due to the hatch) and may fall from it if the vehicle is flipped down. One disadvantage of the turret is that it has a limited elevation range of between -10 and 20 degrees (compared to the -20 and 30 degrees of other similar turrets), being difficult to attack targets at close range or ones hiding on tall structures, as well as low-flying aircraft in general.

Similar to the Insurgent Pick-Up, the rear passengers on the Armored Boxville can toggle between ducking into the vehicle or getting on the gunner seat by pressing right on the D-Pad. This tactic can be extremely useful in case the gunner is very weak and needs to regenerate their health back by ducking into the Boxville. Once they regain their health, they can press right on the D-Pad to get back up on the gunner seat. Another tactic can be done if there are multiple players on the rear seats, they can take turns being gunners. The ability to use the turret can be done either from the passenger seats or while standing on the roof in case that both rear seats are occupied and another player wants to use the turret. 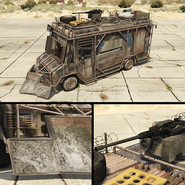 The Armored Boxville on the updated Rockstar Games Social Club.

The Armored Boxville on the updated Rockstar Games Social Club.

An Armored Boxville using the wedge to push another vehicle out of the way.