GTA Wiki
Register
Don't have an account?
Sign In
Advertisement
in: Characters, Characters in The Ballad of Gay Tony, Mission givers,
and 4 more
English

Armando Torres is a main character and a friend in The Ballad of Gay Tony.

Armando and his constant companion Henrique Bardas, are two of Luis' oldest friends. The trio are said to have grown up together, gone to school together, and got in a lot of trouble together. While Luis has left Northwood for the success he found working with Anthony "Gay Tony" Prince, Armando and Henrique have remained in the barrio where they are still often found hustling on the streets of Northwood. With Luis not around as often, the trio has become a duo in which Armando fills the role of brains to Henrique's muscle. Armando can be seen to be slightly resentful of Luis' decision to work in the nightclub business, feeling as if Luis has abandoned his origins and is trying to be something he's not.

Armando, along with Henrique, first appears when they try to get in the Maisonette 9 club, telling that they are Luis' friends, however, Dessie does not allow them to enter. Luis soon comes and drives Armando and Henrique to their home.

Later, Armando and Henrique asking Luis to help them with a drug deal with a dealer known as Papi, and protect them in another drug deal, when another gang tries to steal the drugs vehicles.

If Luis does not have a sniper rifle for one of Ray Bulgarin's missions, he will call Armando for a rifle.

Also, Luis can call Armando during Rocco's mission, if he needs any weapons.

He is still very loyal, however, to his old friend, selling him weapons from the back of his Black Cavalcade at 30% off normal prices as well as backup on certain missions. With the help of Luis, Henrique and Armando start a drug empire which they build up by ambushing drug convoys, stealing stashes and raiding deals. 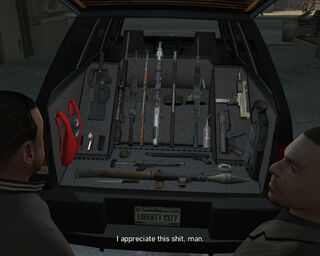