GTA Wiki
Register
Don't have an account?
Sign In
Advertisement
in: Pages with non-numeric formatnum arguments, Articles with sections under construction, New articles,
and 6 more

1969
“You want to succeed in business like it's 1969? Here's three tips to make it to the top. One: Throw a few punches. Two: Kiss a few asses. And Three: Flex the Imponte Arbiter GT, old style muscle for the new style sociopath. Who's the boss? You're the boss. Now go get 'em.”
— Southern San Andreas Super Autos description.

The Imponte Arbiter GT is a two-door hardtop muscle car featured in Grand Theft Auto Online as part of the Expanded & Enhanced Edition of the game.

This vehicle is primarily based on the 1970 Pontiac GTO, with additional design cues taken from its Judge package, while the headlights are similar to those of the 1970 Chevrolet Chevelle. Its rear portion design is similar to the 1968 GTO, with the bumper derived from the 1972 Ford Torino.

The "450GT" badges can be seen featured on the driver-side of the grille and the front fenders. The rear of the vehicle includes the Imponte name on the driver-side and its logo in the center, while a Hao’s Special Works badge will also appear on the passenger-side when converted in said auto shop.

The interior of the vehicle is shared with the Gauntlet Classic, sharing the same dial set and details such as the wood paneling and traditional gear stick, with the steering wheel bearing the Imponte logo on the center.

The primary color covers the majority of the vehicle’s body, with the secondary color covering the trim detail on the headlights, frame and rear bumper.

Pre-release promotional image showcasing the Arbiter GT, located to the left of Hao. 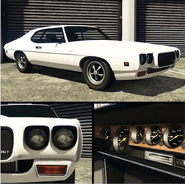 The Arbiter GT in the cinematic preview on Rockstar Games Social Club.