The Vapid Apocalypse Slamvan is a custom pickup truck featured in Grand Theft Auto Online as part of the Arena War update.

The vehicle is essentially a modified variant of the Slamvan, having a worn bodywork with rusty underside and details. The front end features a flat bumper and a traditional grille with vertical separations on it, while retaining the circular headlights and the bulky hood. The sides and the cabin remain identical to the regular Slamvan, but features an external roll cage over the pillars and the roof, along with rally nets on the side windows. The rear section removes the truck bed in order to fit the massive engine with a large intake just behind the cabin, the protective cage and the fuel tank, while the rear end has two circular red lights and a single square white light. On the underside, the Slamvan uses steel beam axles with leaf suspensions, together with the corresponding gearbox, driveshaft and rear axle differential. There are two steel tubes running across the driver side of the vehicle and connected to the rearmost left of the engine block, likely intended for the pedal controls/wiring from the cabin.

The interior of the vehicle is similar to the Sasquatch, having the "Dominator" dials on the horizontal frame of the internal roll cage and on the driver-side panel. However, the floor area is fully covered and uses sports seats with safety belts. A fire extinguisher can be seen in front of the central levers, as well as protective frames on the doors.

The vehicle can be equipped with two side-mounted machine guns in place of the fenders, which resemble either M1919 Browning or short-barreled Browning M2HB machine guns. 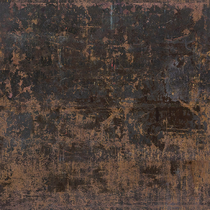 The vehicle performs similarly to its base model, having average acceleration and top speed. However, the player may experience fishtailing upon initial acceleration due to the high amount of engine power delivered to the rear wheels, and some degree of understeer at high speeds. The unequeal weight distribution, short wheelbase and wide rear axle means it can easily lose control if the vehicle hits an obstacle. Because of this, the Slamvan can be very difficult to use in Arena War modes due to the narrow spaces and short roads of the arena maps.

The Apocalypse Slamvan can be modified at Los Santos Customs and other mod shops, although special upgrades are only available at the Arena Workshop.

Modified example of the Apocalypse Slamvan on the Arena War website. 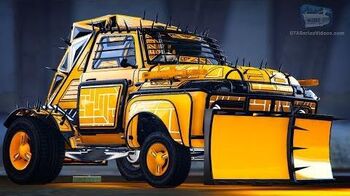