Standard White - 100%
“They built 'em good in the Seventies. So good, you can stick a meat grinder on the front and drive right through the badlands without losing a single drop of effortless cool.”
— Arena War description.

The Vapid Apocalypse Imperator is a custom muscle car featured in Grand Theft Auto Online as part of the Arena War update.

The vehicle is evidently based on the 1973 Ford Falcon XB GT, more specifically the Pursuit Special from the Mad Max franchise. The front of the car is heavily inspired by the Vauxhall Firenza "Droopsnoot", albeit much wider, while the taillights seem to bear resemblance to the ones found in the 1970 Plymouth Road Runner.

The front end of the car is distinguished by its triangular shape with a seemingly small bumper on the outermost area, where the lower portion features a small extender, a wide intake and two small unusable fog lamps beside the same intake, while the upper area has a protruding shape on the centre and four square headlamps on the outer sections, with the inner ones being placed slightly ahead of the outer ones. The bonnet area has a protruding section on the centre and a cut-out section for the engine intake, along with two narrow intakes near the windscreen.

The sides of the car are denoted by the flared arches and the four exhaust stacks between the doors and the rear wheel arches, while the doors themselves have circular rear-view mirrors and traditional handles. The glasshouse area has black side trim on the lower sides and black separations for the rear-quarter glass panes, while the rear window is partially covered by louvres. The rear section has a small boot lid and a lip spoiler.

The rear of the car consist of a black panel with six tail lamps on the outer portions, with the upper ones being the brake lamps, the middle ones the main lamps and the lower ones the turn indicators, while the lower area has a riveted bumper with a dedicated section for the number plate. The area below the bumper also has two rounded mouldings finished in black, intended for rear exhaust setups. Its underside denotes the exhaust tubes coming from the engine bay and the dragster-style rear axle, having various articulated arms and shock absorbers with their lower mounts below the axle's height. Its interior is shared with muscle cars such as the Dominator, the Buccaneer and the Dukes.

The vehicle has access for a primary colour applied on the bodywork and the engine cam covers, as well as a secondary colour for the surroundings of the headlamp housings, the trimmings around the cabin, the mirrors, the door handles, the rear bumper and the interior stitching. It uses a set of black rims similar to the ones seen in the Hotring Sabre and are wrapped in high-profile tyres, with the rear ones being wider. When switching to custom rims, it is revealed that the wheel colour is set to yellow upon purchase.

The Apocalypse Imperator can be modified at Los Santos Customs and other mod shops, although special upgrades are only available at the Arena Workshop.

Modified example of the Apocalypse Imperator on the Arena War website. 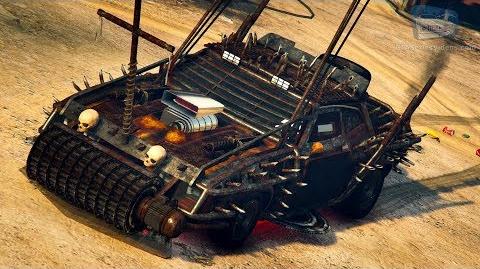