Standard White - 100%
“The world will end in fire and rage, civilization will disintegrate, humanity will descend into bands of feral nomads, and people will still be running errands in apocalypse-proof two-door vans.”
— Arena War description.

The Declasse Apocalypse Brutus is a custom van featured in Grand Theft Auto Online as part of the Arena War update.

The vehicle is evidently based on the custom 1988 Chevrolet K-2500 Silverado from the film Tango & Cash, given the similar cabin, the large compartment on the back and the similar weapon mounting on the left. The front fascia and bumper bear a resemblance to the 2014-2018 GMC Sierra, albeit de-chromed, whereas the tail lights are more based on the Chevrolet Silverado of the same generation.

The vehicle is depicted as a custom two-door van with a similar profile to the Rumpo Custom, where the front end features a bulky bumper with a plastic section at the bottom, two hooks on the center and two rectangular fog lights on the outer sides. Above the bumper, there is a rectangular grille that is finished in plastic and features the manufacturer emblem on the center, six horizontal and four vertical frames on it, with one of them being larger and mounting two rectangular amber lights on the outer "slots" of the grille. Beside the same grille, there are black headlight housings with circular headlights and small amber lights on the outer sides, while the hood area is relatively small and has an elevated section on the center, which is as wide as the grille.

The sides of the truck are denoted by the square-shaped bulky fenders and the plastic side steps, as well as the ridged details between the bodywork and the rear compartment. The cabin area features a sectioned windshield with plastic trim around and small mirror wings near the A-pillars, while the rear compartment occupies the rest of the vehicle and is taller than the cabin's roof.

The rear of the truck features two black housings on the outer edges, each one having upper main lights, middle rever lights and lower brake lights, together with indicators beside the reverse lights. The lower area features a license plate on the center, a small bumper and a single exhaust muffler on the driver side, while the rear end has seams for what would be an openable compartment. The underside of the truck is very rusty and has impact struts, which begin suspended at the center of the truck and continues down to the wheels, in a similar manner to trucks like the Sandking SWB and its XL equivalent.

The interior of the truck uses the same dial set and textures as the Speedo, with the dashboard obviously larger to compensate the elongated cabin. The manufacturer emblem can be seen on the horn cap.

The vehicle only has access to a single primary color, which is applied on the entire bodywork. Although not accessible, the secondary color seems to be only applied on the rally fogs of the "Jackal" Ram Weapon, which is set to a black color. It uses a set of wheels identical to the "Mudslinger" off-road wheels seen in Los Santos Customs, wrapped in high-profile tires. These rims can also support a dedicated color, although only naturally-generated examples may have a black color.

The vehicle can be equipped with a left-mounted machine gun on the rear fender, which resembles either an M1919 Browning or a short-barreled Browning M2HB.

The Apocalypse Brutus can be modified at Los Santos Customs and other mod shops, although special upgrades are only available at the Arena Workshop.

Modified example of the Apocalypse Brutus on the Arena War website. 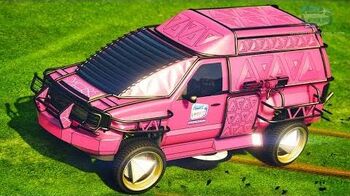