No
“A military-grade anti-aircraft trailer. Comes with the Valid Sadler for transportation or, if you’d prefer, target practice. Weapon customization available in the MOC or the Avenger.”
— Career Builder description.
“It might be called an Anti-Aircraft Trailer, but don't let that put any limits on your creativity. What you choose to reduce to smoking rubble with this thing is your business, and the sky is most definitely not the limit. Comes towed by a Vapid Sadler as standard.”
— Warstock Cache & Carry description.

The Vom Feuer Anti-Aircraft Trailer is a towable trailer featured in Grand Theft Auto Online as part of the Gunrunning update.

The trailer is seemingly based on the M17/M51 Trailer Mount, judging by the overall design and purpose.

The Anti-Aircraft Trailer is depicted as a twin-axle, small-sized trailer with a sturdy tow hitch on the front, a trailer jack with a single wheel, and two stands on the rear corners of the underside. The trailer features an axe and a shovel strapped on the front, various ammo boxes on the front section of the bed, a large circular mounting on the center for the turret, and various items covered by a camo netting on the rear section. The rear quarters of the trailer have "Vom Feuer TR-56" markings on the upper area and dual circular amber lights on the lower area, while the rear end has a set of three circular tail lights on the outer edges, with the upper ones being the main lights, the lower ones the indicators and the middle ones split between the upper reverse lights and the lower brake lights.

The trailer is mostly painted with a primary color, while the rims are painted with a secondary color. It uses a set of industrial wheels with a similar rim design to the Lawn Mower, the Fieldmaster and the Cutter, but lacking bolt details around the center (similar to the Cutter's wheels) and using medium-profile tires with standard tread pattern.

By default, the trailer is equipped with a quad machine gun turret with their guns resembling Browning M2HB .50 caliber machine guns (inspired by the M45 Quadmount) and manufactured by Hawk & Little, but can be modified to have either a six-launcher SAM battery turret with the launchers seemingly inspired by the MK-21 Launchers (albeit smaller in size), or a dual Flak cannon turret with their guns resembling 2 cm Flak 30/38/Flakvierling anti-aircraft guns and manufactured by Vom Feuer.

The following vehicles are able to tow this trailer:

The Anti-Aircraft Trailer's body design makes it rather susceptible to body roll, similar to other small trailers, but its twin-axle design gives it more stability and its lower body panels give it a lower center of mass. This, together with its suspension make it more stable than other towable trailers, but care should be taken when making fast maneuvers, as the trailer can still move around with considerable force and potentially eject the gunner out of the seat. Players can make powerful weapon combinations with vehicles such as the APC and the Half-track, as long as players are careful enough not to destroy the trailer by accident. Also, drivers should note that the trailer is not amphibious (if one tows it with the APC).

Being a trailer, it does feature its own handling line and being a turreted vehicle, the gunner can sit on it.

The Anti-Aircraft Trailer lacks any sort of armor, making it a vulnerable target to explosives in general. However, due to the lack of any mechanical propulsion system, it cannot be damaged by regular rounds, only being able to be destroyed with explosive rounds from the Heavy Sniper Mk II or the Pump Shotgun Mk II. The gunner is rather protected from the front thanks to the gun shielding and the front wall of the turret, but caution should be taken against targets to the side and rear, as well as above the trailer's level.

Players should take extra care of the trailer when facing off against threats; regardless if the main vehicle is armored or not, the blast radius might destroy the trailer. This also applies to the Proximity Mines used on the main vehicle.

The trailer is equipped with a turret that has 360-degree coverage and a 40-degree elevation angle, effectively purposed for attacking aircraft and most threats on the ground. When towed, however, the main vehicle blocks the frontal view of the trailer, limiting its potential for defensive situations. Only one weapon can be installed at once.

The Anti-Aircraft Trailer can only be modified at the Vehicle Workshop inside a Bunker. This also serves as its saved location.

Pre-release screenshot of the Anti-Aircraft Trailer taking out a Hydra.

Three Anti-Aircraft Trailers with different options, as seen on the job image of the Mobile Operations mission Exit Strategy.

The Anti-Aircraft Trailer with the "Skulls" livery. 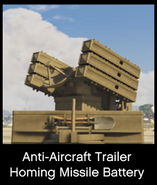 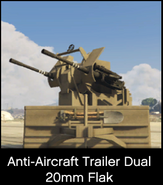 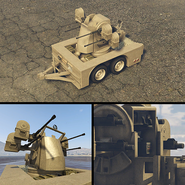 The Anti-Aircraft Trailer on the updated Rockstar Games Social Club.

The Anti-Aircraft Trailer in a Cinematic preview on Rockstar Games Social Club.